By the time Gary Moore left us (all too soon) in 2011 he’d had at least 3 separate careers – the Thin Lizzy guitar-slinger, the 80’s hard rocker and the blues playing elder statesman reinvention He also, apparently, left behind a fairly sizeable and investigation-worthy archive of unreleased studio work. ‘How Blue Can You Get’ mines his 90’s-2000’s blues seam, and very good it is too.

This lovingly curated (from the Moore family archive) 8 song set features an equal mix of covers and original material and, although no information is given as to when they were recorded and for possible inclusion on which album, it’s a fascinating and thrilling listen.

So let’s tackle the covers first. It’s fairly predictable fare, but no less enjoyable for that. The opening moments of Freddie King’s ‘I’m Tore Down’ give us that live-in-the-studio vibe. There’s a bit of Hammond organ and then that guitar tone – thick, fierce, aggressive, vintage Gary Moore. The riff is dealt with efficiently before we roar into the reason that we’re all here in the first place – the solo. The looong solo. And it’s every bit as good as we expect, chock full of howling, screaming notes. As good as it is, though, you can see why it never had an official release. Yes, it’s Moore playing the blues but that’s it, there’s nothing to differentiate it from any other Moore rock blues, he can do this while having a nice afternoon nap. It feels, more than anything, like a warm up, a jam before they really got down to work.

We also get a great version of ‘Steppin’ Out’, made famous by Mr. Clapton on the Bluesbreakers ‘Beano’ album, and a respectful, assured version of a BB King classic which highlights how overlooked Moore was as a vocalist, his performance here is stellar. We also get a molten metal take on an Elmore James track which is the pick of the bunch – raw, scorching slide cuts through the riff, it’s a gutsy, rocking, not-at-all reverential take which is all the better for that. It’s the blues, but it’s Moore’s blues, and fuck the purists.

Then we come to the originals. ‘Looking At Your Picture’ is a contemporary John Lee Hooker style stomp. A distorted, swampy guitar duals with a hip hop beat until a filthy, fuzzed out solo wins the day. It’s just a groove really, but what a groove.

The other three tracks come from the Moore patented slow blues style – the same stable that brought you ‘Still Got The Blues’ and ‘Parisienne Walkways’. You sit through them, soaking them in, listening to the tales of heartbreak and love gone wrong, waiting, just waiting for the appearance of that ludicrously long, sustained note that will herald the heart-wringing epic solo. It never quite appears but it does hover on the horizon, Moore seemingly deliberately teasing us. The tracks are uniformly brilliant, he must have had a suitcase-full of this type of track in an attic somewhere written and ready, just waiting to be dusted off, popped on a new album and played to an adoring audience somewhere. Ah well, at least we get to hear them now.

So, a fine album, worthy of any fan’s attention. Well produced, mixed and played as only Gazza can. The only question left is, is that it? Have the archives been emptied, or are there more treasures to come? Who knows, but for now we can enjoy this and raise a glass to a departed and much missed hero.

Released by Provogue Records on 30 April 2021 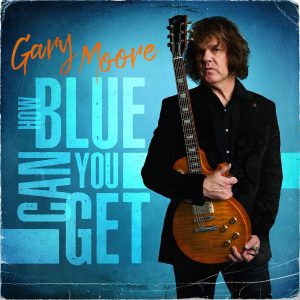