Out in the fields….

Self released on 4 May 2018 and reviewed by Gary Cordwell

It’s May – that time of year again. The festival season is almost upon us, so what better time for Funke And The Two Tone Baby to descend upon us fair music lovers of Albion again. Funke, for those who don’t know, is one Daniel Turnbull, a one man ball of energy who hits stages armed with just his guitar, a small keyboard, a harmonica and a small bank of pedals, wires and gizmos and weaves a very unique magic.

‘Denizen’ is album number three and this time around Funke (let’s hope he doesn’t mind being referred to as this) has really nailed his sound. It’s still energised yet chilled, loose yet planned…but sounding as though it was created in the moment it was played. Now the sound is fuller, the electronics and beatboxing have been amped up – but in a wonderfully cobbled together, organic way (and not at the expense of those olde guitar things). You get the feeling that this is how his songs have always sounded in his head.

It’s a sound tailor made for festivals and indeed it was created, in Turnbulls own words, “out in the fields”. It’s music to be experienced in a sun drenched field, friends around you and plastic pint cup in hand. The brilliant ‘Work All Week’ is about nothing less. It’s stripped back and single-minded, an ode to the great British mid-sized festival and it’s constructed to be a singalong par excellence. It’s a simple pleasure and aren’t those usually the best?

So, what else do we have? ‘Genghis Khan’ buzzes with energy and word play, Turnbull extemporising fast and loose, like a Creamfields Dylan. Several tracks have subtle touches of afrobeat and world music atop the makeshift beats while there is still plenty of time for a brace of bucolic acoustic beauties. ‘House’ is an ironic ode to settling down while ‘Fortuna’ is a balmy joy – tambourines and lazy banjo tossed seamlessly into the mix. ‘Doppelganger’ manages to mash up jazz funk, drum & bass and acoustic interludes with effortless elan.

There are rougher edged moments too. ‘Reshape’ has sinister keys, a brooding electro throb and spare yet harshly jagged guitar. Fried and wired, it’s a heavy come down, the distorted harmonica bleeding into a church organ. ‘The Signal Is Cut’ is brilliant – and slightly pissed off. Dirty beats blend with almost desert blues guitar. The album ends with a wry eco-warning, but, to be fair the end of the world has never sounded jauntier. Funke signs off with one final thought…”choose life”.

This is, hands down, his best album yet. It seems to find him in a better place emotionally than ‘Balance’, his previous release. “Music is a healer”, he states at one point, “a roomful of strangers become my brothers and sisters”. He’s found his home, his people….he’s a denizen. Like Jurassic Parks T-Rex, Funke appears to have been genetically engineered to exist at festivals, to be found ambling around a field somewhere. Anywhere. Soaking up the vibe. Upbeat, happy, confident in where he is and what he’s doing, he’s on a high. His is a difficult sound to describe, it’s one you really have to hear yourself, so get out there and catch him in his natural habitat. 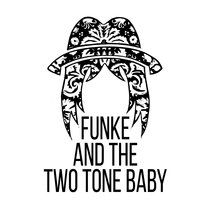