It’s certainly true that you can’t judge a book by the cover but the sleeve which houses Fullminator’s third release Omniplasm immediately caught my attention. It has a sci-fi vibe presented in a riotous cornucopia of neon purples, pinks and fluorescent greens which suggests all that was great about ‘80s thrash. This Puerto Rico quintet definitely draw from that aesthetic and Omniplasm is an EP which speeds away in 17 blistering minutes.

With a sound rooted in the hardcore end of thrash (think Agnostic Front and Warzone) Fullminator aren’t here to take prisoners and their sense of urgency is evident in opener ‘Artificial Immolator (AI)’. Not wasting a single second it arrives with all fists (and follicles) flying as the band set out to cram an insane amount of notes in the shortest possible time frame. Reminding me of Exodus’ ‘Open Season’ in its musical ferocity it’s a skin shredder but whereas ‘Open Season’ closed a beastly record ‘Artificial Immolator (AI)’ kicks off Omniplasm and sets the bar exorbitantly high. Plenty of neat time changes permeate and it’s a track that’s sure to incite circle pits wherever it’s played.

Fullminator hail from the small town of Orocovis, often called The Musical Capital Of Puerto Rico, but I bet they’ve never seen the likes of Fullminator before. ‘Checking Accunt$$’ is the confrontational second track and it detonates like a series of depth charges with charismatic vocalist Reptilian Deluxe delivering his words with rapidity. Factor in a chest thumping bass, a drummer nailing his kit to the floor and two dualling, amphetamine powered guitarists and you have a pretty volatile combination.

I’m sure to the uninitiated and cloth-eared thrash metal must sound like a blur but there’s often a strong groove present (that hardcore punk connection) and ‘Perihelion’ features plenty of mosh parts punctuating the all-out thrash. Something of a musical maze, it twists and turns and leads the listener on a seemingly endless chase. ‘Omniplasm’ is the frantic title track that opens like the gates of hell spewing forth countless demons. Wild guitar solos illuminate the sky as some fine gang vocals add a nice touch of menace. It races forward at a furious pace and it’s the musical equivalent of a joyride culminating in a head-on crash…but what a buzz!

Things get decidedly messy on closer ‘Fight For Your Right’. A high-octane cover of the Beastie Boys tune that’s akin to Anthrax and GWAR mixed in a blender. Highlighting the oft overlooked humour embedded in thrash it forms a fitting finale that should sate even the most demanding thrasher. 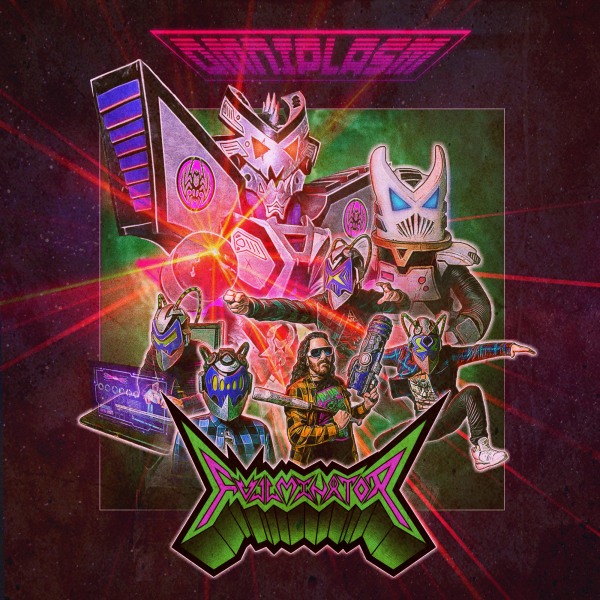