Frozen Ocean is the solo musical venture of the Russian artist Vaarwel. His album The Prowess of Perdition released earlier this year was near rapturously received and this four-track EP is no less satisfying.

It consists of never heard before material that Vaarwel has agreed to an extremely limited release of the tracks. Collected together under the title A Faded Missive Therefrom, they are now to be released on CD by Operator Produkzion.

Opener ‘Lux’ is a softly softly beginning with melodic birdsong (yep, tweets are not just for Twitter) laid over a lush mellow soundscape that gently aligns its well cushioned contours around you.

Vaarwel’s virtual one-man enterprises tend be so far off the edge as to spar with the precipice. About as far removed from the X-Factor mass market appeal as is possible to be, A Faded Missive Therefrom is an extraordinary work that stimulates and moves like few others.

The eight-minute opener, a kind of Countryfile fan’s idyllic aural backdrop, is a remarkable exercise in statuesque sound and yet like so much of what the Moscow maverick creates the effect is all consuming and powerful. It locks you in a hold as tight as a marmalade jar lid and leaves you suspended as the delicate shapes spread their magic around you.

‘Pluvia’ is a little shorter but no less serene with additional atmosphere provided by the background waves of running water that trickle through the folds of the song, alongside a keyboard that further embellishes with a soft symphonic sweep.

‘Nox’ is a more haunting piece, lasting just a couple of minutes, but with a distinctly eerie Hitchcock like feel, with tinkling keyboards jarring alongside deeper grooves.

The final piece ‘Lichten op de Muur’ is longer than the first three pieced together and certainly the most abstract. It’s simply an empty shell, the sound that of a barren wintry terrain through which a desolate chill wind gentle blows. No sound can be clearly defined as being made by man, just a frosty drone that stretches seamlessly ahead.

A Faded Missive Therefrom probably isn’t the kind of thing you’ll put on just before heading off for a Friday night pint with pals. But for the darker, more somber and sober reflective moments in life then Frozen Ocean may be just the aural backdrop you’re seeking. 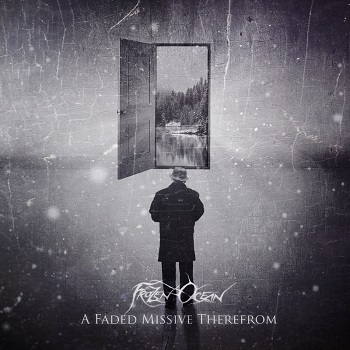 This extremely limited release is not being widely distributed. Contact Operator Produkzion directly to secure your copy – yao91404@mail.ru