There’s been some debate recently about attendances at Prog gigs, particularly outside our beloved capital city, but I don’t think anyone could complain about the crowd this bill drew to the Robin on a wet Sunday night. There was a lengthy queue when the doors opened, and by the time the evening’s entertainment began the Robin was looking pretty full.

I’ve been wanting to see Kiama since the project was first announced, the collaboration between Rob Reed (Magenta), Dylan Thompson (Shadow Of The Sun and late of The Reasoning), Luke Machin (Maschine) and Andy Edwards (IQ and ex Frost) was pretty enticing on paper and hearing the subsequent album did nothing to dampen expectations. The live band is augmented by Godsticks and Magenta bassist Dan Nelson and backing vocalist Tesni Jones, and on the evidence of this gig, they’re already a pretty formidable live unit. Having said that, the opening minutes of the gig weren’t the best. The sound mix was off, with Tesni’s backing louder than Dylan’s lead vocal, and the whole sound a bit of a distorted muddle, but as the set went on, it cleared up and fortunately didn’t hamper the enjoyment of a really fine set.

With the line up, you might think we were in for some serious prog, but instead the band’s sound owes far more to the great rock bands of the 70s like Uriah Heep and Deep Purple, and like those bands, Kiama aren’t afraid to push the boundaries a little, ‘Muzzled’ showed they could make a decent go of being a proper Blues band if they wished, while ‘To The Edge’ had enough of a funky edge to be worthy of the great Dan Reed Network. Similarly, like those Classic Rock bands, there are some excellent musicians on stage. Rob Reed’s abilities on keyboards are well known but this was my first real opportunity to see Like Machin in action and he was hugely impressive, moving from some highly technical work to the blues effortlessly. A word too, for Dylan Thompson, a much underrated singer. The epic ‘Slipping Away’ was a great climax to an excellent set, leaving everyone present with the strong impression that this is a band to be reckoned with. 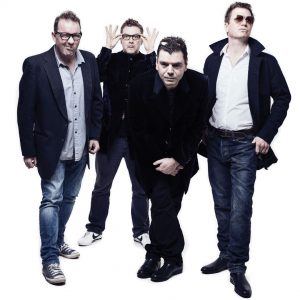 FROST (now without the asterisk apparently), aren’t the most prolific of bands, and while this tour is in support of their new Falling Satellites album, the previous one, Experiments In Mass Appeal,  came out in 2008. It’s tempting to call it something of a super group, including as it does John Mitchell (It Bites, Lonely Robot and last seen in The Robin as a member of Heather Findlay’s excellent band), Nathan King (Level 42), Craig Blundell (Steven Wilson) and Jem Godfrey, whose day job is as writer and producer for million selling pop acts like Kelly Clarkson and Atomic Kitten, but this should not divert from the fact that this is a proper progressive rock band, playing imaginative and ambitious music. For all that, the show opens in a comparatively low key manner, with Jem Godfrey strolling on stage unannounced and with the house lights still up, and singing the opening song on the new album ‘First Day’ accompanied only by himself on piano, before the rest of the band enter for ‘Numbers’. It’s a powerful opening, but again, slightly undone by the sound for the first few minutes.

The remainder of the opening half of the show was mostly choices from the first couple of albums, including a terrific ‘Hyperventilate’ and an equally powerful ‘Pocket Sun’, before Godfrey observed that he’d previously made a vow that he would never record a song longer than the seventeen minute long ‘Milliontown’ on Experiments In Mass Appeal, only to come up with an even longer piece for the new album, the 31 minute ‘Sunlight Suite’. Being scrupulously fair, it’s not so much a single piece as a song cycle, beginning with the almost-AOR of ‘Heartstrings’. ‘It’s not long enough!’ shouted one comedian in the crowd, but frankly, if you weren’t familiar with the music, while some of the individual songs are excellent, quite worthy of being judged in their own right, there were times when some of the instrumental passages dragged, and if the early part of the work was enjoyable and pacey, towards the end it definitely began to feel all of its 31 minutes.

That concluded the main set, and there were two encores, firstly the excellent ‘Black Light Machine’, which showed how good Frost can be, then the set ended as it began, with Godfrey solo, to sing ‘The Other Me’. I suspect, for non-fans, this wasn’t a vintage gig, for all the tremendous turn out. When the band clicked, they were really impressive, but there were a few passages where you could feel the audience’s attention slipping, and for me, the main memory of the night will be the quality of the support band. I will genuinely look forward to seeing Kiama again in the future.