Q: Hi Sina, many thanks for talking with Midlands Rocks. Congratulations on the new album Chamrosh (reviewed here) – How pleased are you all with it?
A: Hi! You are welcome, thanks to you for your attention and support. Well, I am totally satisfied with the new album. It is actually exactly how I wanted it to be. The sound, the production and the final result. The other guys are also happy with the result. So, we are all pretty pleased with it.

Q: How long had you been working on this new material?
A: I started writing the new material for this album last year, right after releasing the Blackhearts EP. I also had written some material back in the time when I was working on the EP but then I worked more on them and shaped them more in a way that I wanted them for Chamrosh. So, it actually took more than a year.

Q: What was your mindset going into the studio, what were you hoping to create?
A: Well, it is in continue of my previous albums, more specifically I can mention the Blackhearts EP. Especially when it comes to the sound and the production, you know. As always I wanted to keep the style, old school, but also wanted make it really sharp in the sound and brutal… I wanted to make the atmosphere of the whole album really dark, cold and frosty with sorrow deep inside also with some epic parts which fits perfectly with the lyrics… So, I started recording the album with this picture in my mind, you know.

Q: Is there any particular concept or theme running through the songs?
A: It is all about Persian mythology, the legends, forces, fights, demons, evil creatures and battle between light and darkness, epic stories…That is actually the main theme and concept of the album as with all my previous albums. 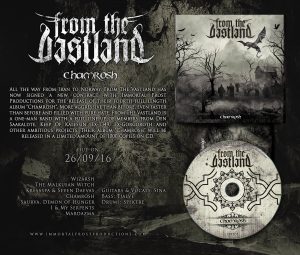 Q: You can feel the anger and venom in your songs. Does that come from a deep place within your soul?
A: Cool! Good to hear that you felt it. Well, I start writing music whenever I feel there is something deep inside that wants to come out. It is really hard to explain but you know, it is not like I wake up and decide to write a song. I just feel it, there is something running in my veins or back of my head, deep in my soul and I just need to let it go out. It is complex, a combination of all emotions and feelings together. So, it is more than just music for me, there is more, deep in the songs, at least I myself can feel it always when I listen to the songs…

Q: For readers who may not know, can you just share a little about your background in Iran and the journey that lead from Tehran to Trondheim?
A: Well, it is a long story but to make it short I can say I started my first Black Metal band back in 2003 in Iran, where BM is completely banned by the government and you have to keep everything underground and like a secret. I have released 10 albums with my previous band Sorg Innkallelse until 2009 and in 2010 I started my new band From The Vastland as a one-man band. But since 2013 when I got the chance to play my first gig ever at Inferno Festival with known and professional Norwegian BM musicians as my backing band everything changed. Now I am in Norway and working actively in the BM scene here. I am also one of the character in the Norwegian documentary about BM which is called Blackhearts.

Q: Does your Iranian heritage influence From The Vastland’s music in a way that a purely Norwegian black metal band may not have?
A: Well, apart from my lyrics which are all about Persian mythology, I have my touches on my music that comes from my background, I mean like Persian melodies that sometimes you hear slightly through the albums or even sometimes I write a riff for a song that has a background from Persian music. And you know this is something that goes the same for most of the bands based on their cultural and music background. So, I think there are always some parts in my music that shows the influence.

Q: How would you say your sound has developed since From The Vastland’s first album Darkness vs Light, The Perpetual Battle was released in 2011?
A: I believe it’s developed and improved a lot! You know, not only the sound and production but also the song structures and the whole thing’s got better. It is all about the experience, especially when it comes to working with other musicians, there is always new experiences that you can learn from. 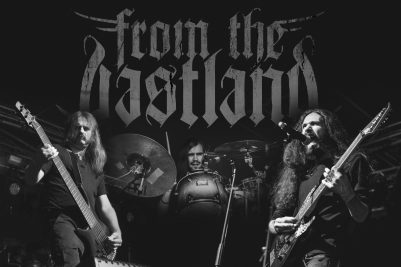 Q: On Chamrosh you have worked with some really interesting and talented musicians who readers may know from bands such as Keep of Kalessin, Myrkskog, 1349 and Gorgoroth. Are these now permanent members of the band?
A: Yeah, actually from the time when I moved to Norway I had this chance to work with great, professional and known Norwegian musicians as you mentioned. And specifically for the Chamrosh album I had Tjalve from (Den Saakaldte/ ex-1349) on bass and Spektre (Horizon ablaze/Harm). Well, from my first gig at Inferno (2013) until now I was lucky to have Tjalve and when it comes to drums Spektre has played several gigs with me also recorded this album. Plus I have recorded music and played some gigs with Destructhor (Murkskog/ ex-Morbid Angel) and Vyl (Keep of Kalessin/Gorgoroth – Live), also some other musicians. So, we all work together depends on the situation…when, where and how, you know…

Q: When you first arrived in Norway your music was a solo project. Are you happier working alongside others in a more traditional band unit?
A: Yeah, true. as I mentioned, I started my band as a solo project but I really like to work with other musicians. I have learned a lot by working with professional musicians. It is also really helpful to improve the music when you work together. It is really beneficial to work as a team. So, I am quite happy about it.

Q: What will the line-up be for any forthcoming live shows?
A: It will be me, Tjalve, Spektre and depends on situation Destructhor or another guitarist will join us.

Q: Will there be a tour to support the new album? 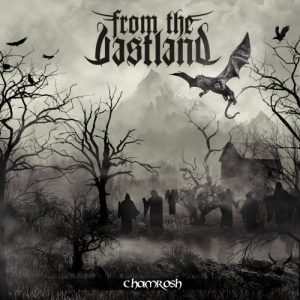 A: We are planning some gigs. The first concert is next weekend in Trondheim at the Rockheim Museum and it is the release concert of the album. We also have arranged another one in November (Kongsberg – Norway) but hopefully it will be more soon…

Q: Finally Sina, have you any plans to bring From The Vastland to the UK at any point?
A: Yeah, I would like to play shows in different countries and of course UK would be great. The thing is because of my uncertain situation here in Norway (because of my visa etc.) right now I can’t make concrete plans for shows outside Norway but hopefully it will be sorted out soon and then we will make some good plans!