Freewheeling straight outta Brampton, Ontario are classic rock quartet Freeways. Formed in 2015 an EP, Cold Front, followed shortly thereafter and it’s been quite a journey to reach their debut album True Bearings. As you’d expect from a band drawing their influences from Wishbone Ash, Status Quo and Blue Oyster Cult they’re armed with a bunch of songs that have hefty hooks and pack a serious punch.

Maybe it’s a Commonwealth thing but listening to the chuggy riff that introduces opening cut ‘Eternal Light, Eternal Night’ there’s a distinctly British feel to proceedings. It’s the melodic end of the NWOBHM movement (think Saracen, Heavy Pettin’ and Hammer) in songs which are simultaneously hard and melodic. An earworm of the highest order ‘Eternal Light, Eternal Light’ is so arresting it should be illegal and it’s the kind of song that’ll haunt you for days. Reminding me of Judas Priest’s ‘Desert Plains’ it’s powered by a riff that constantly fires like a Triumph Bonneville. Well constructed and built for the long haul the song briefly employs that classic Maiden gallop and, as it reaches a tuneful conclusion, this could easily be the Marquee Club, 1981.

With a twin guitar attack from Domenic Innocente and Jacob Montgomery ‘Sorrow (Was Her Name)’ is a riff heavy affair that sets the stage for an insanely catchy chorus. Mid song the band make good use of the devil’s tritone for a suitably satanic sound that could swing with Sabbath. In addition to delivering some serious riffage Jacob also sings soulfully and the sweet harmonies bring to mind the harder edge of AOR in Bonfire and Journey. But, while were on the subject of serious riffs, that which opens the title track, ‘True Bearings’, hypnotically spins like a roulette wheel. It seems the song’s tailor made as the perfect accompaniment on a long road trip beneath a bruise coloured sky.

Swaggering with the confidence of Thin Lizzy’s ‘Chinatown’ the evocative ‘Dead Air’ follows as frozen guitar lines intertwine and soar ethereally. Much of the lyricism on True Bearings is about finding strength in adversity and that’s perfectly exemplified on the muscular ‘Battered And Bruised’. It’s a song introduced by powerful rhythm section, bassist Amar Amrith and drummer Sebastian Alcamo (playing in that tight-but-loose style perfected by Bill Ward) who combine to ensure that ‘Battered And Bruised’ is a punchy affair. The seven minute bluesy workout ‘Time Is No Excuse’ follows as candlelit shadows dance upon plaster peeled walls with the guitars duelling gently.

Ensuring they depart as they arrived ‘Survival’ has a fine circular riff that finds Freeways on an upward spiral as they seem to disappear into the ether. My only minor complaint is that, at 33 minutes True Bearings is too brief a visit, yet I’m left with the feeling that this is the first stop on a long voyage. 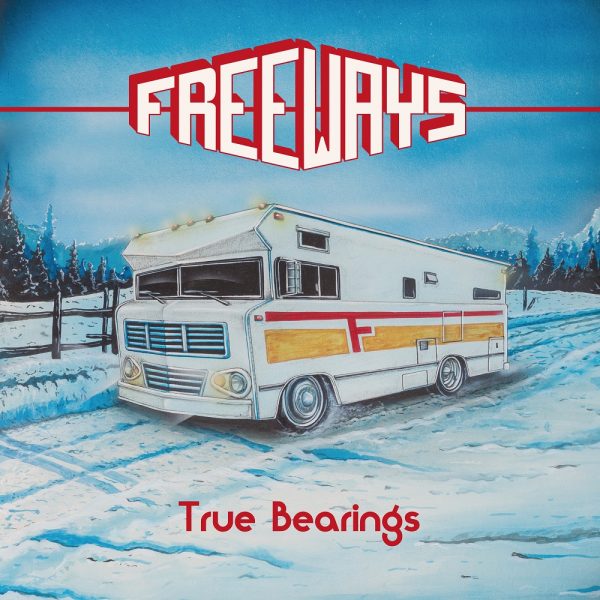