Across the sprawling sun-baked fields of Catton Park every August three stages play host to the collective metal talents annually assembled to perform under the banner that is Bloodstock.

Oh yes, there’s the fourth stage, easily missed by many or mistaken for a bar thanks to the Jägermeister signage or perhaps a mobile phone top-up point by those whose brain capacity is gradually reduced to dust by three days of intense combat in the pit.

The cosy Jägermeister platform – to call it a stage is probably a contravention of the Trades Description Act – does though host some enterprising performers over the three-day festival.

Last August was no different and among them was the solo figure of Tom Reynolds, perhaps better known as the one man ball of destruction, Foul Body Autopsy.

To see Tom absolute rip through half-a-dozen or so of his songs with trademark power and conviction was a little treasure devoured by a relatively small number of fans drawn away from the bigger names otherwise engaged on the main Ronnie James Dio stage, or yonder in the Sophie tent.

Anyone yet to have the walls of their chest crushed to near breaking point can now experience those dubious delights thanks to this forthcoming monstrous six-track EP, Perpetuated By Greed.

It follows last year’s EP So Close To Dehumanization which focused much of its anger on the world of mass meat production and came complete with an abbatoir video that featured a lot more blood and guts than your average horror flick.

This time around it’s not the treatment of animals that triggers’ Tom’s vitriol but man’s treatment of man. Whether that’s the mindless pain and death inflicted by the grotesque black flag waving loons or indeed our own Government’s sympathy, or lack of it for those quite literally caught in the crossfire.

This is a feral beast of a record that rampages through the half-dozen tracks in around 11 minutes as though there’s a train just leaving the station and you’ve got to hop on board at all costs coz you’ve realized you’ve left your mobile on board..

The title track is an absolute powerhouse, with the old school onslaught sure to gain approval from fans of the likes of Dying Fetus, Autopsy or Suffocation.

With four of the six songs under the two-minute barrier, there’s scant time for niceties or somber reflection. It’s full on, whipping up a sonic storm like a tornado on heat.

Tom does of course play all the instruments from the deftly executed riff spirals to the never less than savage drum blasts.

Only on the closing four-minute marathon (almost) ‘Complete Environmental Collapse’ does Tom adopt a slightly more measured approach, steadily building the song with well layered riffs before the razor sharp hook is followed by Tom’s familiar bestial bellows as the stench of Foul Body Autopsy once more fills the room. 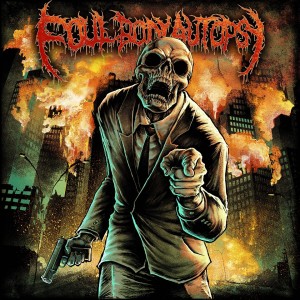