Reviewed by Brian McGowan and released by Ear Music on 27 April 2018.

Demonstrating that a successful brand can be repackaged many times over, and that a rich back catalogue can be mined indefinitely, Mick Jones’s band have released more compilations and live concert recordings than studio albums.

The band’s latest release, a live album recorded with the 21st Century Orchestra and a 60 piece choir last year in Switzerland, proves that it’s not always your best selling stuff that translates most readily to symphony orchestra arrangements.

Back when Ian (King Crimson) McDonald was in the band, many of the the songs already had a symphonic, classic rock feel. The harmonically adventurous ‘Cold As Ice’ and ‘Feels Like The First Time’ were subject to the prescient addition of strings on bonus track versions. Here, they truly burst into life, bristling with moments of frenzied excitement, and dazzling choral arrangements, warming up the night air and an appreciative crowd.

Yet, arguably, it’s the lesser known of the band’s two big ballads, ‘Waiting For A Girl Like You’ that grabs centre stage. The whole thing may be rooted in nostalgic homage to the band’s big selling years, but this song’s laid back persona effortlessly creates a bridge to the past – and the audience. Grand rather than grandiose, the symphonic arrangement teases out the the brooding heartache and youthful sensuality that filled the band’s earlier material.

‘Say You Will’ is probably one of their most underrated songs, coming from one of their most underrated albums, Inside Information (1987). It sounds remarkably lean and nuanced on the band’s unplugged version (Acoustique 2011), but the arrangement on this live recording, with woodwinds, piano and shuffling layers of latinesque rhythms is overwhelmingly brilliant. The same and perhaps more can be said of ‘Urgent’ – a song that started life as a lone riff on a tape Mick Jones played to Foreigner 4 producer Mutt Lange. It now sounds thumpingly epic. They’ve smartly kept the indispensable sax riff, and very cleverly and sparingly sprinkled the orchestra and choir around the edges, gilding Kelly Hansen’s blood pumping vocal performance.

There’s often a transformative quality to orchestrated pop and rock. This album rummages through the past and presents some great rock songs in an entirely different way. The band’s core fanbase will get much out of it, and even rock fans whose only ever encounter with Foreigner was hearing them on the radio, might just sit up and take notice.

That enterprising German label, Ear Music, tempts you with a 2 CD package, a 17 track DVD and a Four sided vinyl version. Invest in one of them. 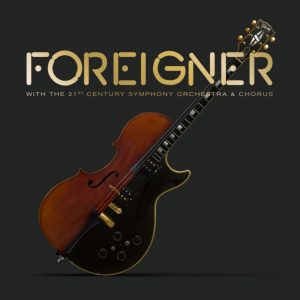