You know, if anything, Foreigner are a better live band now than they were 30 years ago. I mean no slight on past members, but in Tom Gimbel (guitar), Jeff Jacobs (keys), Jeff (Dokken) Pilson (bass) and Jason Bonham (drums) you have one of those real exceptions…industry vets who sound young and vital. They may be past the first flush of youth, but as an old engineer I used to work with would constantly insist, “there’s no substitute for experience”. That’s equally true of the songs. Classic rock doesn’t age. And this back catalogue bears frequent repetition. Mick Jones is, as ever, the consummate professional and band leader – as he has been since his days with Johnny Halliday in the sixties. That’s why this band sounds so good live. This recording dates from 2005, one of the band’s first live appearances with vocalist, Kelly Hansen. He may lack Lou Gramm’s soulful tone, but his range and stagecraft are second to none.

Recorded live during a US tour, this is clearly where the band’s strength lies. You might have suspected that years of touring would have dulled the band’s motivation and performance edge, but no, in these days of samples, synthetics and simulation, Foreigner deliver one stunning set piece after another. Mick Jones still gives the obsessive’s attention to fine textural detail… ‘That Was Yesterday’ is orchestral in its symphonic pop sweep and a seven minute ‘Starrider’ elegantly spans the years from the band’s Spooky Tooth/King Crimson roots to twenty-first century Las Vegas, where the gig took place.

As became custom, the concert ends with a magnificently entertaining, 9 minute mashup of ‘Juke Box Hero’ and LZ’s ‘Whole Lotta Love’, a long standing, Anglo-American tribute to the UK’s greatest rock band, from whom Jones took much of his inspiration. The concert and the album end, of course, with the dramatic rush of fittingly fabulous encore, ‘Hot Blooded’. Jones knows it would be foolish to attempt to gild the lily with this song. Just lay it out bare, and let its stew of blues, rock and pop simmer and sparkle in the sun. 75 million people can’t be wrong. 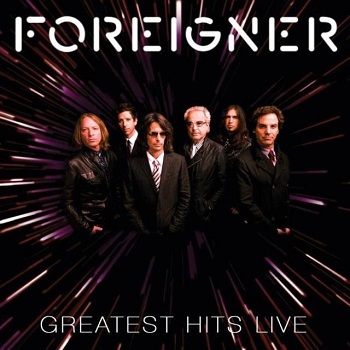