Justifies the band’s hype and achievements…

Re-releasing an album can sometimes be a tricky decision. Depending on the bands genre and fan size the decision could ultimately push people away rather than bring others in, one thing tends to remain the same however, no matter the genre or the band; fans want new music. Feral Sun are making them wait, and you know what? They’re pretty damn right to do so.

With a tour with Skindred (you may have heard of those guys) recently finished. The 4-piece from London could walk into those shows knowing that they have enough hype around the band because of the re-release to at least get people to take notice. Throw 4 guys, who’s only release of note was two years ago onto a tour with a band the size of Skindred and in a phrase, people aren’t going to care. It’s a case where for a young band like Feral Sun, whether the album is good or not doesn’t really matter too much, what matters is that they have got themselves in a position to play it. However, Evacuate is actually very, very good and does nothing more than utterly justify the band’s hype and achievements at this moment in time.

In general, the record has a very atmospheric and anthem-like feel, illustrated particularly well by opening song ‘Find A Way’ which gives lead guitarist Marco Lo Coco room to breathe and give us a taste of what we can expect throughout the record with the kind of riffs that will be replaying in your mind for weeks on end. This anthem feel is continued into second track ‘Alone’ which carries a similar bite with the addition of a more melodic performance by vocalist Mick Burns, whose voice compliments pretty much every beat throughout the record. ‘Alone’ is a personal highlight from Evacuate and is a song the band will be patting each other on the back for as their popularity continues to rise.

Album title song ‘Evacuate’ mixes things up, without taking away too many ingredients. It has an incredible pace to it, which if you weren’t already makes you stand up and take notice of Feral Sun (and maybe nod your head aggressively at the same time) the song itself has a cohesive sound surprisingly strong for a bands’ debut album and carries those kind of riffs that either result in air guitars, or circle pits.

‘Into Pieces’ brings with a teeth grinding edge that makes it absolutely impossible to ignore. Creating a song that has enough melody to appeal to an audience that enjoys a “softer” kind of metal and enough pace and as mentioned, edge to keep those of a heavier variety is tough. But it’s particularly well done here and Mick Burns shows his adaptability by sounding at home during both parts of the song.

Former single ‘Breath’ takes Evacuate back to his anthem sounds and does it brilliantly, the slow and atmospheric riffs mixed with Burns’ variety of vocal performance leaves Feral Sun with something that fans can appreciate whether they are in a room on their own, or in a venue packed to the rafters. The bass slapped by Alex Nikitin is something not to be overlooked here, as Alex does a superb job of bringing the song together.

Towards the end of the record and ‘Caught In The Act’ and ‘Falling’ may not be the best songs on the album but still have enough strength to pull you in. Their high intensity and altogether relentless riffs are generally a good way to finish a great record, all out chaos. Feral Sun is a band that have been moving around the scene quietly over the last two years, but with the re-release of Evacuate, they are about to become deafeningly loud and should have their sights set on stardom in 2015. 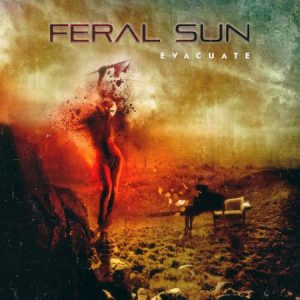