Watched the above video? Kid can play. He’s fiery yet mellow, taking things at a measured pace. Good though. So, the skinny – Rabin is a 24 year old (I know, sickening right?) French born, Switzerland based bluesy singer-songwriter, inspired by…well, you’ll see. He’s toured with the likes of Wishbone Ash and was due to support the wonderful Samantha Fish on her UK/Euro tour before the current weirdness kicked in.

Rabin released his debut album in 2018 and ‘Pogboy’ is his first EP. In answer to the next question, a Pogboy isn’t a Rowling-created magical beast, it’s Rabin’s nickname, so earned due to his constant use of a Pog pedal effect during the recording sessions for the EP, particularly on opening track, ‘Walk’. His guitar work is rarely showy, it’s sympathetic, complementing the music. It’s soulful, relaxed, the horns (yes, there are horns) are classy, adding bluesy flourishes.

‘Say (You Won’t Leave Me)’ heralds a surfeit of wah-wah and Hendrixy antics. It brings Dan Patlanski to mind with it’s loping fun rock but, like, smoother, not as raw. Rabin then hits full distortion mode with ‘Angels’, it’s rousing stuff.

Things take a turn for the Floydian with ‘Death’, Rabin’s soaring solo is full of emotion and restraint as he duels with a mournful Miles-esque trumpet. Final track, ‘Gone’ is smooth and husky until Rabin begins to reach for the sky and wails off into the ether.

So there we have it – a talent to watch indeed. An EP full of confident writing and playing – smooth, measured and sure to take off onstage. I’m certain we’ll be hearing much more of the Pogboy in years to come. Roll on album no.2. 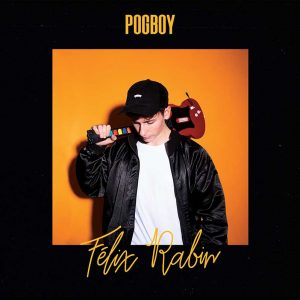