It’s the outdoor extreme metal event of the year not to be missed. Paul Castles previews this year’s Bloodstock Festival which commences at Catton Park on Thursday August 7.

Unlike some summer festivals the weather is usually kind at Bloodstock.

However, those making the journey to this rural retreat for three-days of unbridled metal mayhem may still benefit from throwing a pair of wellies into their survival kit.

They may need them just to wade through the treacle thick sludge that will be emanating from the main Ronnie James Dio Stage (RJD). NOLA comes to Staffordshire in the hirsute shape of Crowbar and Friday headliners Down.

Thanks to Kirk Windstein these bands have always been brothers in arms. After 25 years pounding the strings with Down, Capt Kirk is now focusing all his energies with his own band Crowbar who will be performing material from their latest album Symmetry in Black (reviewed here) on the Saturday.

The day before the southern riff lords perform, the equally devastating Down will headline the RJD, fronted of course by former Pantera vocalist Phil Anselmo.

These two bands alone are worth the admission money but the great news– as is always the case with Bloodstock – is that there are others of equal distinction to be found oozing from every corner of the sprawling Catton Park site.

Friday’s line-up is stunning with Irish pagan protagonists Primordial, hardcore heavyweights Hatebreed and the merciless Triptykon, whose Melana Chasmata album has rightly been tipped to top plenty ‘album of the year’ polls – not that such trivia is likely to register with their enigmatic frontman Tom G Warrior.

Bloodstock lends itself to the outrageous and anyone seeking a wager on the most decorated stage set could do worse than invest their life savings on Norwegian black metal masters Dimmu Borgir.

Earlybirds at the Sophie Lancaster Stage (SLS) must check out Gurt who delivered a devastating performance when supporting Dopethrone at the Birmingham Asylum recently (reviewed here).

Other notables on the ‘second stage’ are mighty Mancunian mobsters Winterfylleth and the final band on Friday, Greek giants Rotting Christ, whose punishing live performance washes over you like a tsunami.

The tented SLS will offer much more than just protection from the sun (or the rain!) and if you’re seeking something dark and doomy then northern nomads Old Corpse Road will be happy to oblige on Saturday.

Sister Sin will bring a touch of devilment to the SLS on the same day while Barcelona boys Obsidian Kingdom offer something else entirely with their heavy ambient aural landscapes.

The RJD stage on Saturday showcases some outrageously gifted acts among them Poland’s death metal destroyers Decapitated, Israeli pioneers Orphaned Land, Italian goth metal gods Lacuna Coil and legendary thrash titans Carcass whose Surgical Steel album (reviewed here) has to go down as one of the most accomplished examples of thrash at its very best in a long time.

Day two headliners Emperor will undoubtedly be one of the most eagerly awaited acts of the whole festival as the black metal grandees have been less frequent visitors to these shores than Ronnie Biggs.

The Norwegian giants have reunited to celebrate the 20th anniversary of their debut album In the Nightside Eclipse. They have been performing it in full at select Euro festivals and Bloodstock has the exclusivity tag in the UK for what promises to be one of those Bloodstock sets that attains near legendary status.

Sunday’s showstoppers Megadeth require little by way of explanation and while Dave Mustang’s merry men will bring the festival curtain down in their customary indomitable style there are plenty of other Sunday specials before the main dish of the day.

Battle hardened Amon Amarth and Stockholm groovers Graveyard make for a notable Swedish double header on the RJD stage where some ball-breaking beats will also be delivered from the likes of Aborted and Brooklyn bruisers Biohazard who are likely to instigate one of the festival’s most ferocious pits.

The New Blood Stage is well worth popping in and out of to catch some of the younger guns including the Metal to the Masses regional competition winners, among them Midland duo Eradikator and Cacodaemonic.

Doors open on the Thursday for those keen to pitch their tent early and there will be a handful of bands performing that evening on the SLS with the full-on three-day festival starting the following morning.

With some eclectic sounds to be found on the miniature Jagermeister stage throughout the four days, the 15,000 metalheads heading to Walton-on-Trent can pin their ears back and prepare to destroy their neck muscles with more than 100 bands heading to deepest Derbyshire.

What more could you ask for?

For all the latest news on tickets, travel details and line-ups visit the Bloodstock website

We will bring you the best reviews, photos and interviews right here in the days following. 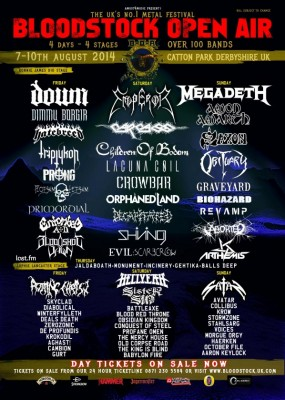