Taking their name from the Russ Meyer 1965 exploitation flick, Faster Pussycat were leading lights of the California glam metal scene. With songs as provocative as their name they lit up the ‘80s and wrote some of that era’s biggest tunes. Collecting three albums and an EP Babylon: The Elektra Years 1987-1992 charts their amazing trajectory from brattish punks to metal masters.

Opening with ‘Don’t Change That Song’ (the video of which was directed by Russ Meyer) and these immortal lines: “Before I turn on my lover, got to turn on my stereo” Faster Pussycat gets off to a suitably sleazy start and doesn’t let up over the next 35 minutes. Released two weeks before Guns N’ Roses’ explosive debut the smart money was on Faster Pussycat becoming the glam metal band and while things didn’t pan out that way there’s no doubt that this is the better album and things don’t get much better than the following ‘Bathroom Wall’. Powered by an insanely catchy riff this was the hit single that never was and its lyrics concerning a cheap hook-up perfectly captured the spirit of summer 1987.

Take the New York Dolls, add part Mötley Crüe and a healthy dash of Aerosmith shake them up and serve on the rocks and you’ll have something approaching the needles-in-the-red vibe of ‘Cathouse’, a track which threatens to claw its way out of your speakers. ‘Babylon’, a Beastie Boys pastiche, gets old pretty quick but things are rectified with ‘Smash Alley’ and it’s the second half of Faster Pussycat where we hit pay dirt. Exploring the seedier side of the nocturnal world tracks like ‘Shooting You Down’ and ‘City Has No Heart’ swagger with bad attitude and badass riffs. In a scene that invariably placed style over substance Faster Pussycat came pre-loaded with talent and if anyone asks you what was so great about glam metal, I suggest you play them this album.

When Faster Pussycat’s sophomore album, Wake Me When It’s Over, dropped in 1989 it sounded like they’d been placed in a rocket and sent into the distant future. Gone were the glam leanings of their debut album to be replaced by a more bluesy sound, but it was no the worse for it. Of course, they were still obsessed with sleazy sex and opening cut ‘Where There’s A Whip, There’s A Way’ succinctly sets out their stall. Sounding like it emanates from a New Orleans opium den it smoulders with black magic and sets a voodoo-tastic tone for the rest of the record. A strong Aerosmith influence is always a good sign and the talk box on ‘Little Dove’ means it wouldn’t sound out of place on Toys In The Attic.

Faring much better than its predecessor this album gate-crashed the Billboard charts (eventually gaining Gold status), mainly on the strength of singles ‘Poison Ivy’ and ‘House Of Pain’. That’s somewhat surprising because all 12 songs break the four-minute barrier so they’re not what you’d consider single material yet, paradoxically, they all sound like hits. From the low down and dirty ‘Slip Of The Tongue’ to the jazzy swing of ‘Arizona Rag Doll’ Wake Me When It’s Over is an album of many shades and subsequently it’s a more rounded listen than their debut (and it’s an album you’ll return to again and again). ‘Please Dear’ is an atmospheric closer that brings Wake Me When It’s Over to a fitting conclusion and, belying its title, it’s certainly not for somnambulists.

Just like Guns N’ Roses’ Lies EP you get the feeling that Faster Pussycat’s Live And Rare was released as a cash-in. However, this EP doesn’t really have the chutzpah that the Gunners displayed, and it falls a little flat. ‘Bathroom Wall’ takes the intro from ‘Babylon’ but it doesn’t really add anything new and edited versions of ‘Poison Ivy’ and ‘House Of Pain’ seem a tad reductive. It’s the three live tracks that bring the EP to life, especially the guitar gymnastics displayed on ‘Pulling Weeds’ and a fun fuelled romp through ‘Babylon’ which is a vast improvement on the version which appeared on Faster Pussycat. At 25 minutes this is a fairly short disc so it would have been cool if a few bonus tracks could have been unearthed to bolster the running time. Despite the strength of the songs Live And Rare is a missed opportunity and one for completists only.

By the time Whipped! was released in 1992 the musical landscape had changed beyond recognition and the glittery, technicolour aesthetic favoured by bands like Faster Pussycat had been replace by Kurt Cobain and his mustard cardigan. Almost overnight a host of bands became obsolete, but the sad irony was that the Pussycat’s were at the peak of their creative powers. As with their previous albums Whipped! found them expanding their sound and opening track ‘Nonstop To Nowhere’ is a fine slab of country rock. This is a hard rock album (with the emphasis on hard) and the band have never punched so powerfully as they do on ‘Jack The Bastard’.

Of course, Faster Pussycat didn’t exist in a vacuum, and you can hear evidence of the prevailing trends throughout Whipped! with ‘Big Dictionary’ getting a bit funky and a nod to Jane’s Addiction on ‘Madam Ruby’s Love Boutique’. There’s even the odd industrial metal flourish (‘Cat Bash’) to signpost the direction the band would take when resurrected by vocalist Taime Downe in 2001. Only ‘Loose Booty’ recalls the juvenile nature of their debut album; reminiscent of ‘Babylon’, it’s the only backward step on a forward-facing album. This disc adds four bonus cuts; a rockier version of ‘Nonstop To Nowhere’, two cuts originally recorded for Whipped! (and eventually released on the Belted, Buckled And Booted EP) and a surprise cover of Carly Simon’s ‘You’re So Vain’ all of which make this the definitive version of Whipped! 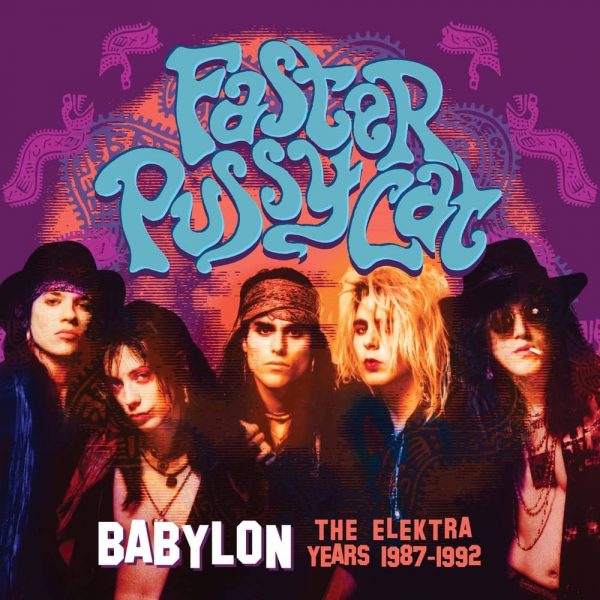