Rotten to the core

Paul Castles goes under the covers with Spanish doom depressives Famishgod, whose second album Abyss of the Underworld, was released via Xtreem Music on December 1, 2016

While Dave Rotten should be known to any death metal fan through his work with Spanish metal matadors Avulsed, he’s also the central figure in an altogether more ponderous musical journey with his doom band Famishgod. Roots of Darkness is their second full length album and it’s no surprise to discover that it has been released via his own Xtreem Music, who of course also handle Avulsed’s own releases.

While Famishgod’s downtuned diet of doom is far removed from Avulsed’s apocalyptic aural attacks it is no less commanding, and arguably Roots of Darkness is up there with much of the very best stuff Rotten’s rancid hands have previously come into contact with. The other pivotal Famishgod figure is Funedëim  (Svipdagr/Morkulv) who contributes the guitar and basslines. Roots of Darkness is the follow-up to 2014 debut release Devourers of Light. While initially a recording project, Famishgod’s recent bow at the ‘Madrid is the Dark’ festival suggests that their stature is increasing and this latest release can only further advance that progress.

‘Abyss of the Underworld’ is a monstrous opener that swaggers to and fro with a great fuzzed up mammoth of a riff over which Rotten doesn’t so much as sing as emit long furball growls and moans. The cutting groove at its centre carries the weight of a small aircraft although never builds up enough speed to make take-off a reality.

The same marauding menace is there in droves on following number ‘Bad Omen’ which features a corrosive chug bristling alongside some nifty lead work with Rotten’s demonic groans in the thick of the murky maelstrom. Most of the tracks here are around eight minutes in duration and midway through ‘Bad Omen’ tensions are heightened as Famishgod almost go into a riffage freefall with an ever expanding range of grooves that border on being overpowering in their command. 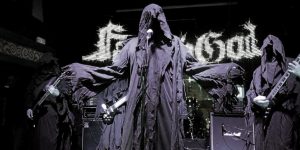 If anyone dare doubt the undercurrent of evil that is straining at the lease within this 65-minute long album then ‘Molested, Defiled, Disrupted’ should go some way to convincing you. This is a slovenly 10-minute slowburner that clings like a leech to the very worst mankind has to offer. It’s dark, depressive and deadly but its odious overtures are at the same time a fetid feast fit to lay at the feet of the gods of doom. It’s almost as though Famishgod have sprung a leak from which the most pungent juices are slowly being released.

The final two tracks stagger through the 10-minute mark with ‘Lost Language of the Dead’ actually building up a head of steam towards the end of its gruesome and grueling journey with Rotten’s gallows humour releasing Luciferian lines…’Devoid of face and without head, no extremities at all’.

A scarcely perceptible pause is the faintest of punctuation points before Famishgod forge ahead on their suffocating trek to the closer ‘Mournful Sounds of Death’. Anyone seeking a proliferation of light at the very end of a grimy tunnel will be found wanting as the Madridistas fire up their bloodied bellows for one final blazing blast of Mediterranean misery. There is some more intricate interplay at the midway point when a chug threatens to break free but Famishgod retain their overwhelming sense of darkness as a tumbleweed tornado of blastbeats starts to kick up an almighty duststorm.

Dave Rotten may forever be aligned to Avulsed but his work with Famishgod is no less meritorious. Roots of Darkness is recommended to anyone with an insatiable appetite for pounding tyrannical doom. 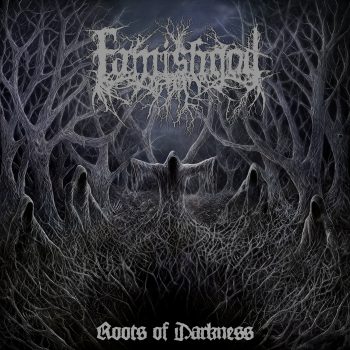