Mashed to a bloody pulp. 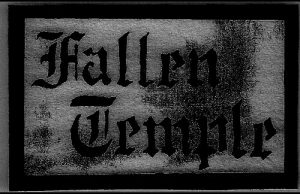 Jason Guest delivers part 2 of his review of the out-of-nowhere collection from Fallen Temple Records (part 1 is here), the remaining four of the seven releases that mysteriously materialized being:

To hear more from Fallen Temple Records, take a listen on Soundcloud. And here’s their Facebook page. In the meantime, have a care…

The debut release from Poland’s Malum In Se (“evil in itself”) is discomforting, disconcerting, and diseased. Obsidian and obdurate, towering walls of black metal savagery burn oh-so-darkly across these two viciously uncompromising tracks. With dismal and despairing melodies lingering in the oppressive and menacing atmospherics created by the hypnotic structures, delivered at a steady pace, both tracks are sharply concentrated salvos as intense as they are unyielding. An EP or album from this faceless horde had best be in the making.

Now this is fucking evil. Everything about this is just right. The band name, the track titles, and the artwork say everything about Eternal Rot. Like a corpse emerging from its grave, clawing at the contaminated soil that has been eroding its flesh, this reeks of decay. And with a murky production laced with an echo that sharpens the snare, imbues the drums with a deadened throb, muddies the mangled riffs and the monstrous vocal, this will mash you to a bloody pulp and leave you to rot, slowly, eternally…

First released in 2010 on cassette, Hin Håle’s Beyond is a miasma of muddy metal meted out through lo-fi production and cranked and crooked distortion, brimming in speed metal riffs, demented lead work, and an evil scowl that on occasion raises itself above the murk into King Diamond territory pervade the ominous atmosphere. Standing on the shoulders of the giants of the early 80s, after the sinister opening title track, the band quickly shift into the high gears and stay there. Raw and stripped back to the bone, the tracks are vicious, yes, but with plenty of this out there already – and a lot of it much better – they’re up against some serious competition. It’s been four years. Their next strike, should it ever arrive, needs to be crushing…

Named after the Celtic Frost track that they cover on this two-track release – a good choice of track very well executed – it’s obvious even before listening to Poland’s Necromantical Screams what they are going to sound like. With only ‘Blessed Death’ to give us some insight into what this band is about, all suspicions are confirmed. Though leaning more toward imitation than innovation, it can’t be denied that given the level of musicianship and skill in crafting what they have, Deadly Frost stands an introduction to a band that, should they develop, could be one worth keeping an eye on.