With near-monsoon conditions during the day causing traffic chaos the MR team caught only the closing bars of Matt & Kim‘s set – enough to establish the idea that they’re far from what one might expect supporting one of most successful bands to ever straddle the rock/pop divide. A drum kit and keyboard adorn the centre-stage riser, the eponymous outfit neon-emblazoned and dancing their way offstage with their dance-pop samples still running; certainly one for the younger demographic of the impressively age-diverse audience.

Possibly an even stranger choice on the bill is Professor Green. Even given the headliners’ dabblings in electronic augmentation, the sight of a single DJ providing all of the musical input (read: pressing ‘play’ and standing back, mostly) for the main support is enough to stir uneasy feelings about how the main attraction might approach things tonight. Green is himself flanked by a pair of backing vocalists leaving the stage looking uncomfortably sparse under a suitably green-tinged lighting setup.

The music itself…given the unbearably bass-heavy mix rendering vocals unintelligible and everything but beats practically inaudible it might be unfair to label it ‘everything that’s bad about modern music’, but not by much. Seemingly crafted with the sole intention of being blasted at ridiculous levels from blacked-out lowered Vauxhall Corsas sporting subwoofers worth more than the engine, it’s a wholly unpalatable warm-up which inexplicably still manages to retain around half of the crowd. Okay, it’s not ‘rock’ by any stretch of the definition so even the most broad-minded MR scribe would probably never willingly review a PG headline show, but still…well…it’s shit. Really shit.

So, with expectations duly lowered and a niggling sense of foreboding, the stage is veiled during changeover before a very ‘Queen’s English’ political voiceover ushers in an almost horror-film-trailer snippet of video. The anticipation in the room is palpable – and then Fall Out Boy hit the stage with a full-bore rock opening, fireworks and all, and hammer into ‘Sugar We’re Going Down’ like their lives depend on it.

Doubts about the outfit’s musical integrity are swept away as Patrick Stump and co demonstrate just how well they can deliver a modern rock singalong, a few new offerings (‘Irresistable’ into ‘The Pheonix’) performed almost entirely devoid of electronic embellishment and none the worse for it. The mix is still a little flabby in the low-end; whether a hangover from the previous set or an attempt to satisfy the more sub-bass-acquainted yoof in the audience is irrelevant, as the sheer quality of FOB’s material shines through like a laser. 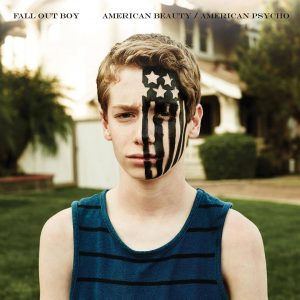 It’s a set to appeal to long-standing fans and newcomers alike, space found for a couple of cuts from debut Take This To Your Grave in amongst the mainstream favourites like ‘Thriller’ and ‘This Ain’t A Scene’… as the band throw out hooklines like a particularly enthusiastic angler. There’s barely space for crowd interaction beyond Pete Wentz’s “I’ve no idea how you all ended up here but we’re glad you made it”, it’s simply not needed tonight; even the slightly boy-band touch of projecting the faces of the front row onto the immense video screens and Stump detaching his microphone to cover some stage distance don’t lessen the impression that Fall Out Boy are still a true rock ‘n’ roll band at heart.

The frontman, Wentz and guitarist Joe Trohman sneak their way out to the sound desk during a mid-set interlude to perform surprisingly intimate acoustic renditions of ‘Immortals’ and ‘Young Volcanoes’ – a trick straight out of The Rolling Stones’ book of how to make arenas intimate, but again one that they emphatically make work. Andy Hurley pulls attention back to the impressive stage setup with a short-but-sweet drum solo culminating perfectly in the opening bars of ‘Dance, Dance’, before ‘Grand Theft Autumn’ somehow manages to turn the Barclaycard Arena into an enormous, sweaty backroom music bar.

The start of the home straight is signalled with another blast of fireworks for ‘Beat It’ and a massive Fall Out Boy logo replacing the moving video present across the back of the stage for most of the set; the signature lighting colour scheme of the video for ‘Thnks Fr Th Mmrs’ brings in the inevitable; Wentz provides an alt-rock pep talk to the fans “saved by our music” before ‘I Don’t Care’ and ‘Centuries’ close up a frankly superb set.

They haven’t played ‘My Songs Know What You Do In The Dark’, have they? So of course there’s an encore – epitomising the old-school/new-school mix it leads into ‘Saturday’ from the first album, Wentz leaving his bass to a roadie to growl out the backing vocals he so clearly misses from their post-hardcore roots. This was a show for the die-hards, the dabblers and the Johnny-come-latelys in equal measure and illustrates perfectly why the band are still relevant despite any ‘Sell-Out Boy’ accusations – here’s hoping they stick with it.