When you’re selling to the same hard rock audience as everybody else, it’s hard to stand out. But two heavy hitters – Graham Bonnet & Dario Mollo – may have done just that with Feeding The Beast. These guys have seen the flames, felt the heat and parlayed the fire into considerable worldwide sales. Bonnet has the pedigree (Rainbow/ Alcatrazz / Schenker), and Mollo has the chops (w/Tony Martin & Glenn Hughes).

Understandably, they lean hard on their past, launching into epic explorations of the classic rock genre at the drop of a hat. Whether it be Alcatrazz (C’est La Vie, You Are Your Money) or Martin&Mollo’s Cage (Colder Than Cool, Don’t Look Back).

Bonnet’s ability to convey raw, emotional urgency, mixed at times with a studied ennui, lifts ‘Motorbike’ and ‘Guys From God’ into out-of-the-ordinary status. On both of these songs – one ironically cheesy and the other sharply humorous – the mature grain of his now creaky vocals adds heft and character to material that might otherwise be overlooked. And while his voice occasionally struggles for traction on the upper slopes of the inevitable reprises of his “greatest hits”, ‘Since You’ve Been Gone’ and ‘Eyes Of The World’, the sheer strength of his persona carries the day.

The currency of classic rock may well still hold its value among genre aficionados, but we’re always looking for the more talented musicians to continue edging forward, to create 4 minute events out of thin air that create a huge dramatic arc as their album unfolds. Ezoo don’t quite achieve that here, but the immense (if slightly overlong) title track – an absorbing, seamless roll through the shifts in tone, texture and intensity of prog metal and hard rock, and the gritty, grinding ‘Too High To Be Falling’, a reminder of the fragility of fame, get scarily close. 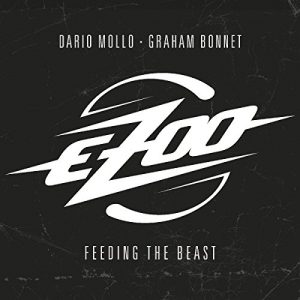