Pivotal in the formation of the whole groove metal scene New Orleans’ Exhorder forever changed the face of music with their first two albums. However, like most pioneers they were usurped by those who followed and refined their sound for mass consumption so if you want to know where bands such as Machine Head and Lamb Of God got their chops it’s right here in this lavish two-disc set containing 1990’s Slaughter In The Vatican and 92’s The Law.

When Slayer dropped Reign In Blood in ‘86 I never thought that it’s sonic ferocity would ever be topped and for several years that held true…until Exhorder burst onto the scene with their incendiary debut, Slaughter In The Vatican. Opening to the sound of a microphone lowered into the very depths of hell but nothing can prepare us for the musical explosion that is ‘Death In Vain’. It’s a full-on sonic assault that’s powered forth by Chris Nail’s hyperactive drumming while the guitars light up the sky like phosphorous flares. Thrash metal doesn’t get much more bloodthirsty than this and there’s little in the way of redemption as the aptly titled ‘Homicide’ follows hot on its heels. However, don’t take Exhorder for one trick ponies as ‘Desecrator’ trades speed for power to deliver a track that weighs heavy on the listener, a ton of topsoil, before it bursts into life like a swarm of angry bees.

In terms of sheer mercilessness there was no way Exhorder could have topped their debut so, just as Slayer did with South Of Heaven, they took a different route on their sophomore effort, The Law. Moving in a decidedly groove metal direction Exhorder have made a sonic shift but it’s a step taken without sacrificing power. If you need proof, then lend an ear to opening salvo ‘Soul Search Me’ and while it’s certainly less abrasive than anything on Slaughter it still packs a hefty punch and could easily trade blows with the likes of Crowbar and Down. The Law is more nuanced than its predecessor and makes good use of musical dynamics and inserts slower, crushing sections next to the thrashier moments with each acting as a foil to highlight and enhance the other. By dint of sheer variety, I’d argue that The Law is a more rounded listen and the funky bass and guitar on ‘Un-Born Again’ throws a curveball while a pleasing cover of Black Sabbath’s ‘Into The Void’ proves they can get down-tuned and dirty with the best.

It was around this period that accusations of plagiarism were bandied about, and comparisons were drawn with Pantera but, like the chicken and egg, it’s hard to say who came first. Legend has it that Phil & Co. were influenced by Exhorder’s chunky Get Rude demo then, roles reversed, Vulgar Display Of Power informed The Law. It’s a conundrum that’s divided fans for aeons but, whatever, there was definitely some cross-pollination going on and props to both for delivering full-on metal albums when grunge was riding high. However, those who prefer the thrash of Slaughter will find a spiritual home in tracks like ‘The Truth’ and ‘Incontinence’ with the latter in particular taking things off the Richter Scale. The relentless skull crusher that is ‘(Cadence Of) The Dirge’ makes for a cataclysmic closer and, as the band were soon to go on a lengthy hiatus, a fitting coda to their early career.

Now out of print and fetching astronomical prices online these two Exhorder albums still sound as fresh as the day they were originally released and if you’re unaware of why this quartet have attained legendary status then this deluxe digi-pack will set you straight. 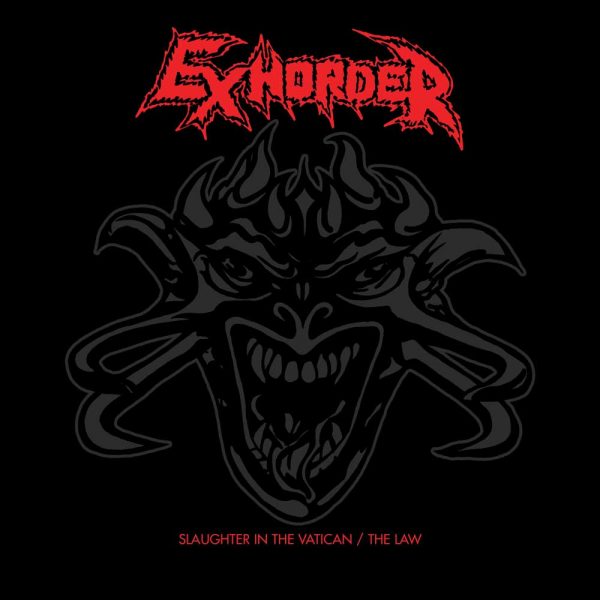