Tortured Demon have got thrash nailed. Their debut album, In Desperation’s Grip, released independently in early 2021, is magnificent. Riffs that’ll rip your face off, scorching solos, throat-tearing vocals, pummelling drums, a bass sound that’s razor sharp, it is track after track of skull-splintering thrash and brain-bludgeoning death metal. This is clearly a band that know their horrible heavy history and have digested every savoury slaver to produce supercharged thrash of the highest order. And that it was written by a three-piece comprised of teenagers whilst still at school makes it all the more impressive. Tortured Demon, like any other young band in this position would, are making the most of this prestigious support slot and delivering their set like they’re back on the Jaeger stage at Bloodstock. Well-equipped in metal’s torture devices, this Oldham band’s – and metal’s – future is set to be incendiary.

Like Tortured Demon, Berkshire’s Divine Chaos are another new band to these ears. Solid, unyielding, and uncompromising in its intensity, this band is a machine. Brutal and bruising, their 2020 album The Way to Oblivion is an absolute crusher. From beginning to end, it’s a monstrous slab of melodic death/thrash, its relentless and grinding grooves laced with precision riffs, lacerating vocals and demolishing drums. Fine musicians one and all, what stands out is the guitar work of Matt Gilmour and Chris O’Toole. Their lines are concentrated, refined even, at times pointed and piercing, and at others, melodic, especially in their dual harmonies, an aspect of their sound that stands out like no other. Played with flawless precision, too cold, too calculated, technique can be the ruin of a band. But Matt and Chris are able to balance their abilities not only with each other but with the needs of the song. So too for bassist Craig Daws and drummer Mariusz Marecki, a solid rhythm section that keep the unit hammering along. And with mighty mouthpiece Jut Tabor at the front, on stage as well as on record, Divine Chaos are an unstoppable beast.

When Huddersfield’s very own thrash titans Evile released Hell Unleashed in April 2021, an album that was given a boot up the backside when lead guitarist and now vocalist Ol Drake re-joined the band in 2018. No frills thrash, it’s an album that rightly received much acclaim. Following Matt Drake’s departure in 2020, Ol has also since taken over vocal duties, and is doing a pretty good job of it too. In the studio, every instrument and every note can be recorded time and again until it’s exactly as desired. But metal bands and metal fans know that recorded performances mean very little if you can’t pull it off on stage. Ol Drake knows this too. And comparing the performance from Bloodstock 2021 with tonight’s show, Ol’s lungs have developed considerably. He can thrash out a vicious barb as fast and harsh as he can rip out a riff and shred out a mind-melting lead break. He also appears to have settled into the role of frontman well, joking with the crowd as he commands a crushing performance from his band and his audience.

As for the rest of the band, Ben Carter is, as ever he was, a powerhouse behind the kit, his beats driving and dynamic. Bassist Joel Graham is having the time of his life and never stops grinning. So too is guitarist Adam Smith. Joining the band in 2020, like Ol, he’s taken to his role in the band very well. This line up of Evile is tight, unstoppable. The challenges that this band has endured over the years, including of course the untimely passing of bassist Mike Alexander in 2009, have done little to assuage their ambitions or their ability to produce a killer album or deliver a savage performance. With classics such as ‘Five Serpent’s Teeth’ and ‘Enter the Grave’ and new tracks ‘The Thing (1982)’ and ‘Gore’ from the new album in their arsenal, Evile’s future looks set to be a scorcher. Yep, tonight’s lineup is proof positive that metal is in very good – and fast! – hands. 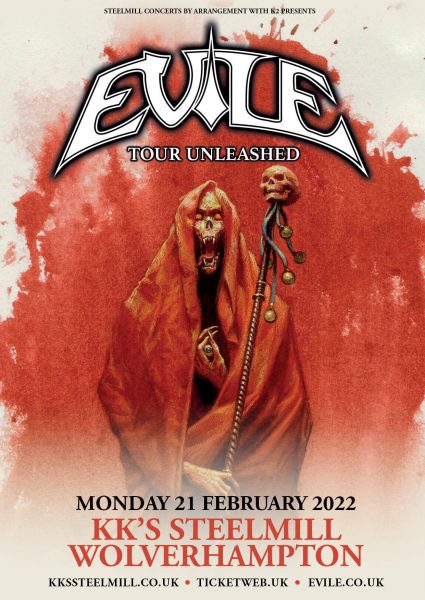