Spiritually nailed to the upturned charred cross of black metal…

A black metal tour de force will be arriving on these shores next month headed by the mighty Marduk (new album Frontschwein reviewed here). The Swedish titans are joined by Austrian blasphemers Belphegor and the twisted triumvirate is completed by Liverpool’s very own black metal warriors Ethereal. Opus Aethereum, the debut release contains enough pulpit pummeling tracks to suggest the Merseyside men will not be out of their depth performing alongside such esteemed visitors from overseas.

While their music has a real sense of purpose and passion, no-one can accuse Ethereal of rushing into things as it’s taken more than decade since the band’s formation for this album to finally come together. While spiritually nailed to the upturned charred cross of black metal, complete with liberal splashing of corpsepaint among the band’s five members, Ethereal create a more symphonic sound that makes them easier to get to grips with compared to some of the genre’s more narcissist acts.

The symphonic slowburner ‘Nomicon’ leads us down the path and towards the spitting cauldron of hatred, gradually winding its way through the pit of darkness before singer Naut signals for the rhythms to be set free with a dismissive ‘urrghh!’ As with so many who swim in the darkest waters of metal, the drums are a key component and Ethereal sticks soldier Mordrath is a central figure throughout. ‘Overwrite The Archetype’ is a rabid beast, meticulously executed, with Naut at various points opening his voice box with a piercing primal roar.

Having undergone the traditional line-up reshuffle over the past few years the focus now seems sharper and this highly promising debut pays testimony to Ethereal’s commitment. There’s a menacing big riff that kicks down the doors on ‘Psalm of the Deceiver’ another frantic aural adventure through the peaks and troughs of the barrenlands. Clearly the sound of the Mersey pounding the Albert Dock was not sufficiently necro enough for Ethereal who guaranteed just the right depth of darkness by having the album mixed at Hertz Studio in Poland by the world renowned Wieslawscy brothers, who have worked with countrymen Behemoth on their all-conquering album, ‘The Satanist’.

‘Contorted Utopia’ and ‘Waking Death’ are high octane skull crushers, with blistering riffs that rip the tips off your fingers while Naut navigates through the black metal maelstrom spitting out volleys of vitriol as he does so. The grandeur of ‘Aethereum’ opens with a symphonic sweep over which Naut mutters some initially impenetrable psychobabble under his breath, but once the mist clears the track takes on a pulsating life of its own, fuelled by darting flames hotter than a baker’s oven.

Ethereal made quite an impression when supporting 1349 on their brief UK visit just before Christmas. Their army of followers should gain a few new recruits when supporting Marduk and Belphegor next month. Just a shame the tour organizers have not been able to squeeze in a Midlands date. Their last local show was a summer spot at Scruffy’s in Brum. The strength of this album suggests when they finally do return to the Midlands they will need a bigger venue to accommodate all those who will want to see them. 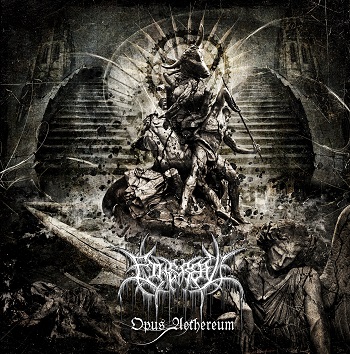