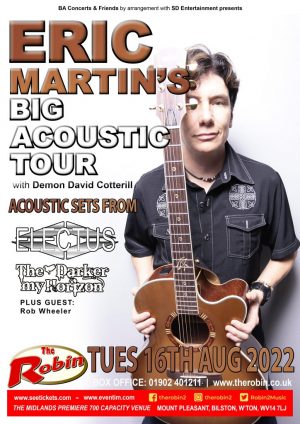 Eric Martin started his career singing at the end of the 70’s for a San Francisco band called 415. With 415, Eric played hundreds of shows opening for established acts like Billy Squire, Hall & Oats, Journey, ZZ Top and Foreigner to name a few. 415 was signed to Elektra/Asylum records and “Sucker for a pretty face” was released after a name change to the Eric Martin Band (EMB). The band parted ways after returning from a 1984-85 ZZ Top tour. After the break up, Eric continued to belt out songs and in 1985 and 1987 released “Eric Martin” and “I’m only fooling myself” solo efforts, which are lathered with Eric’s signature soulful voice and candid lyrics. In 1988-89, Eric would team up with Billy Sheehan, Pat Torpey and Paul Gilbert to form Mr. Big. They would enjoy enormous success with the release of 6 studio albums, numerous hit singles and 6 top-selling live cd’s. All combined, worldwide sales top the 7 million mark. Eric’s third solo album, “Somewhere in the middle” was written during the two-year hiatus from Mr. Big and released in 1998 in Asia and Europe. During the summer of 2001, Eric and the rest of the Mr. Big guys released their last effort, “Actual Size.”

In between promoting and preparing for Mr. Big’s 2002 “Farewell Tour”, Eric continued to record songs for his fourth solo cd. He promised a return to his “rawk roots” and he definitely did so with the album, “I’m Goin’ Sane” which gathered excellent critics and was released in Asia, Europe and The US in late 2002. After the success of a Japan tour, a European “Gods Festival” and a 23 city US tour, Eric decided to go back into the studio to record “Pure,” a EP that covers his hits in an unplugged and stripped acoustic form.

In early 2004 brought Eric back into the studio to record “Destroy All Monsters” which would be released in Japan, Europe, The US and the most recent, South America. The album sound is something Eric calls “Distorted Pop” with a focus on his rock roots.

That same year Eric was unable to promote the album as much as he wanted due to a call from the biggest guitar star in Japan, Tak Matsumoto. Tak’s band, B’z have sold over 80 million records and held onto success for over 12 years. Tak decided to put together a rock band with his favorite players, this would include Eric on vocals, Jack Blades (Night Ranger/Damn Yankees) on bass and Chris Frasier (Steve Vai/Edgar Winter/Eddie Money) and of course Tak on guitar. They spent four months writing and recording an album in Los Angeles, did a 10-day promotional tour and followed with a Platinum album and a 20 city sold out tour ending in Japan’s infamous 15,000-seat arena, Budokan.

In 2005, Eric wrote and recorded the theme song for the hit pay per view television show, “Pride FC” which is a major ultimate fighting program. The song, “The Last Man Standing” debuted New Year’s Eve 2006 on pay per view to millions of viewers. Eric also wrote and recorded a song for guitar legend, Ronnie Montrose’s new cd, 10×10. Eric sings along 9 other singers including Sammy Hagar, Edgar Winter, Davey Pattison and Mark Farner. The 10×10 album sparked interest in Eric’s vocal performance and he was asked to sing the classic song, “Guitar Man” with Ronnie Montrose, Danny Carmasi and Ricky Phillips to take to the Sundance film festival.

Eric Martin is still alive and kicking, touring regularly in Europe, North and South America, Australia, India and Japan as a solo artist as well as with his new celebrity rock group, Scrap Metal. In 2008, Eric signed a deal with Sony Japan to do a series of albums containing domestic and international hits. Sony brainstormed a concept to allowing the rock singers alter ego to come forth and sing the ballads that his fans have always loved. The first album, Mr. Vocalist #1 debuted in the top of the charts and reached platinum status. His second effort, Mr. Vocalist #2 appeared on the charts at the same time MV1 was still running strong. Eric is one of a small group of artists to have two albums on the charts simultaneously. 2009 also marked the 20th anniversary of Mr. Big in which the original line up decided to get back together. They released a greatest hits album that went to #1, embarked on a sold out tour and recorded a live DVD at the infamous Budokan in Tokyo. The band had so much fun together that they decided to continue making music. They recorded and released “What If” in 2011. The band followed the album with a world tour for over 7 months. After wrapping the tour, Eric went back into the studio to work on more Mr. Vocalist music. He also set out on a type of tour he’s always wanted to do, a solo acoustic run. Eric did a month of shows in Europe playing his solo material as well as the Mr. Big material he wrote. He wanted to play the songs as they were written, before Mr. Big polished them up. The tour was so successful that Eric opted to do it again. In March of 2012, he did another month of shows across Europe by himself. In April, Eric joins forces with Avantasia for a stadium tour of their rock opera that Eric was apart of recording. This show is known for having 20+ people on stage at one time and is a show you don’t want to miss.

In 2019, Eric formed the Eric Martin Trio with PJ Farley(Trixter), and Ben Hans(Kip Winger Acoustic), get ready to hear all the hits with a whole new sweet sound.