In a similar vein to their Norwegian compatriot Ihsahn, Enslaved have a seemingly intrinsic ability to reinvent themselves, at times almost album by album. In recent years the inspired Scandi warriors have developed into a monster capable of headlining bigger venues and festivals. At this stage in their career Enslaved should be playing second fiddle to no-one.

Ihsahn is a worthy reference point also as it was his band Emperor that made up the flip side of Enslaved’s first split release in 1993. One for collectors!

As with their recent work such as In Times (2015) and E (2017), Utgard sees Enslaved’s bold brush strokes reach further into the corners than ever before. With subtly disguised nuances, they have now spread their wings into all manner of soundscapes some way removed from their earliest black metal forays. The album E really did elevate Enslaved into the more mainstream audience, the revered Bergen veterans no longer the preserve of metalheads alone.

Opening track to this their fifteenth album is ‘Fires in the Dark’ which starts with some mystical earthy chants almost reminiscent of those Cornish crooners Fisherman’s Friends as Enslaved ensure the runes are aligned before unleashing another remarkable album propagated with northern sky mysticism and magic.

Longstanding fans should fear not that they have absolved themselves of all past sonic sins… far from it and the second track ‘Jettegryrta’ opens with an earthy roar to the Nordic gods before slipping comfortably into its own rhythmic direction, a bristling powerful surge, momentum only briefly broken by one diverse protracted prog intervention, the first of many such transcendental moments on what must be the band’s most ambitious album to date. 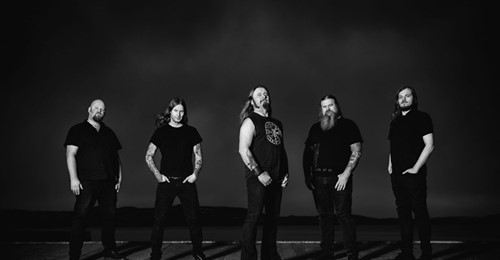 At times Enslaved sound as though they have so many strings to their bow they barely know which one to pluck first. It is to their credit that the decision is always the correct one and the further into the album we venture the more tempting its myriad of sparkling secrets become. This album is also the band’s first with Iver Sandøy on drums and with more head scratching moments than a cryptic crossword Utgard is an album that demands an element of patience and persistence if you are to even come close to unraveling its many labyrinthine passages.

The album’s longest song is the majestic ‘Sequence’ which features a foreboding beast of a chug at the start but as the melody opens up a vocal dual breaks out with the rough gruff barks of Grutle Kjellson occasionally pulling back to allow the silken clean cries of Håkon Vinje to step in.

‘Homebound’ pushes the same buttons, albeit with the rhythmic energy notched up a little as Enslaved warm to their task, the dual guitars of Ivar Bjørnson and Arve ‘Ice Dale’ Isdal creating some heartwarming grooves as momentum builds into the kind of epic expansive sound that will fill an arena.

The album’s title track is something of an interlude, a dark and mysterious spoken psalm read out over a hum of the elements, the wind lashing in the distance before melding into electro injection from keyboard player Håkon leads into the more pressing sonic steps of  ‘Urjotun’. 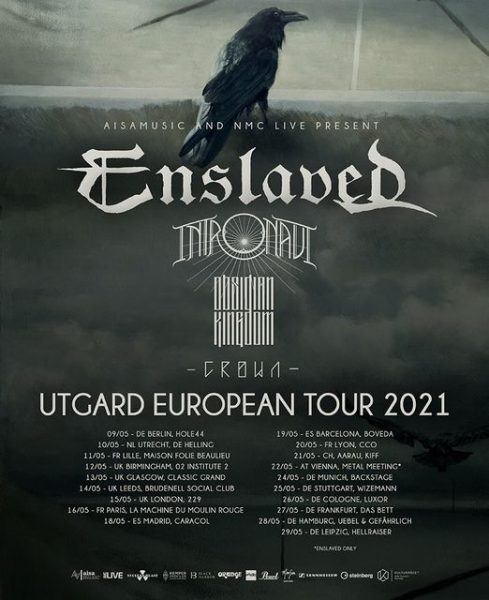 The increased use of clean vocals and finely crafted progressive grooves on the likes of the at times dreamlike ‘Flight of Thought and Memory’ takes Enslaved into the same realms occupied in more recent times by their close Scandi cousins Opeth.

As with the incomparable Swedes, Enslaved’s directional shift has not always pleased everyone. Was ever thus. But perhaps to expect a band to last the course of 30 years without ever exploring new areas and seeking to stretch themselves is a little shallow in view.

Enslaved though remain willing and able to bare their teeth, Grutle’s deathly delivery still ultimately an integral fixture of their sound.

Utgard is not a Norwegian term readily open to classification with Grutle proffering… On a psychological level it can represent the spheres of sleep, dreams or lucid dreams; the outer borders of your own consciousness and what lies beyond them in the subconsciousness.

Certainly ‘Storms of Utgard’ fits into that pattern with its multi-layered formula throwing up twisted tapestry that turns one way and then another making for a jolting ride as the Norwegians veer off into seemingly dead-end cul de sacs before somehow extricating themselves. The album ends though on probably its most open and friendly track of all, ‘Distant Seasons’ rich in melody creating a bewitching warm vista, the clean vocals alone this time making for an enchanting and captivating closer.

While Grutle and Bjørnson’s songwriting talents may not yet be spoken of in quite the same breath as Lennon and McCartney, the pair’s prodigious output, through which quality is never sacrificed, should ensure that at least within the runes of metal circles the name of Enslaved continues to be respected and happily for us spoken of in the present rather than just the past tense.

Utgard was released on October 2 via Nuclear Blast 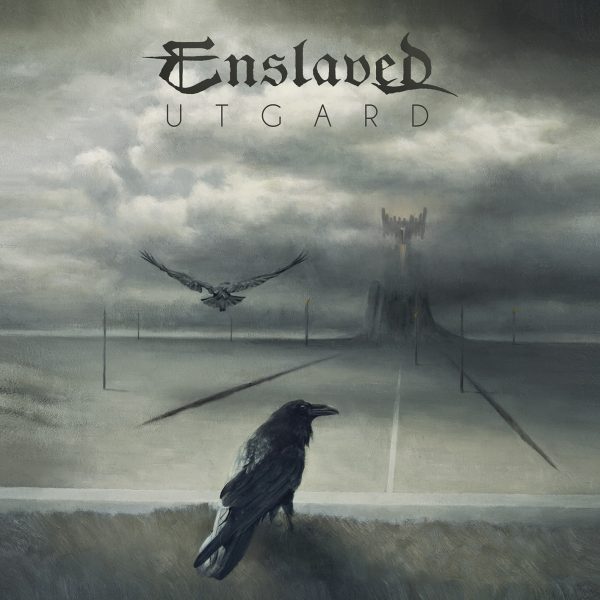