Swedish heavy metal band Enforcer recently announced their second live album, Live By Fire II, which will be released through Nuclear Blast Records on March 19th 2021. Today, the band releases a live video for the second single from this captivating live recording: ‘Destroyer’. 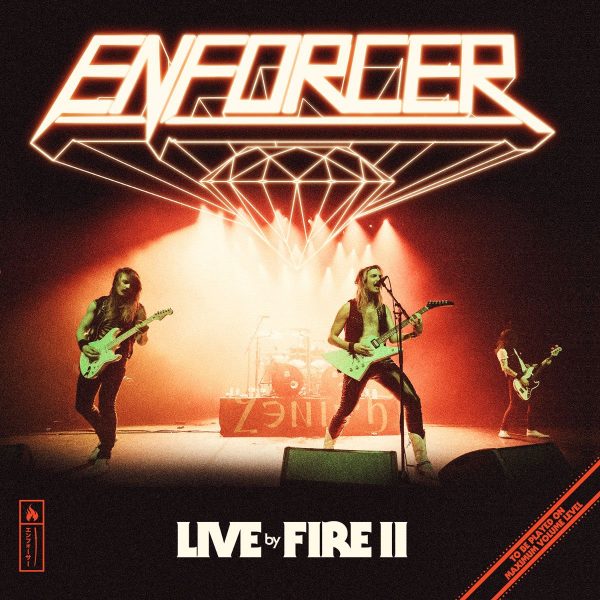 Olof Wikstrand comments: “Destroyer! The song where the title says it all. It’s another live classic from the previous five years that kicks the audience in their ass and get’s them going. Among my all-time favourites to open with and to play live.”

Witness the merciless fury of ‘Destroyer’:

Previously, the band launched a live version of ‘From Beyond’, which you can watch here: https://youtu.be/CYKA391G7pQ

Live By Fire II offers an intense and passionate performance captured in front of a truly dedicated and wild audience in Mexico City, 2019. Live By Fire II lets you experience Enforcer at the top of their game and marks an outstanding live record documenting the group’s steady path to global recognition in recent years. It also serves as a stunning reminder of how many heavy metal anthems Enforcer have crafted on their total of five studio albums so far! From the speed metal attack of ‘Destroyer’, ‘Searching For You’, ‘Midnight Vice’ to perfect sing-alongs like ‘From Beyond’, ‘One Thousand Years In Darkness’ and ‘Take Me Out Of This Nightmare’, the enthusiastic crowd and powerful sound of Live By Fire II result in a captivating and extremely entertaining listen.

Physical formats of the release will include extensive booklets containing a programme, liner notes and tons of photos compiled and designed by vocalist/guitarist Olof Wikstrand recapturing Enforcer’s touring cycle for the albums From Beyond and Zenith during the years 2015-2020. Live By Fire II will be released as Gatefold 2LP with 16-LP sized booklet, CD with 28-page booklet, and digital album.

Pre-order the album in the format of your choice, here: http://nblast.de/Enforcer-LiveByFireII

The full video of the entire show will be premiered on release date!
Set a reminder now: https://youtu.be/TYXzX5z7f6Y

The tracklist reads as follows:
01 Die For The Devil
02 Searching For You
03 Undying Evil
04 From Beyond
05 Bells Of Hades + Death Rides This Night
06 Zenith Of The Black Sun
07 Live For The Night
08 Mesmerized By Fire
09 One Thousand Years Of Darkness
10 Guitar Solo + City Lights Jam
11 Scream Of The Savage
12 Drum Solo
13 Run For Your Life
14 Take Me Out Of This Nightmare
15 Destroyer
16 Katana
17 Midnight Vice