The marriage of solo performers with bands can sometimes result in brilliantly successful collaborations. Julie Christmas working with Cult of Luna on the standout album Mariner is a clear case in point.

Not far behind that epic is a new piece of work that brings together the acclaimed solo performer Emma Ruth Rundle with US doom miserabilists Thou. The two first came together at Roadburn in the Netherlands last year where the latter took up residency and from that initial live liaison things have holistically evolved to the point where we end up with the seven-track release May Our Chambers Be Full.

There are seven new songs that make up the 37-minute sojourn and the experiment is at times captivating and moving. From the opening low-slung march of ‘Killing Floor’ the two forces collide to commanding effect, Thou dropping those low bass lines that trip you up with Emma offering the juxtaposition of ethereal vocals nestling atop the funeral frost of the men from Louisiana.

The release is the latest in a series from Sacred Bones Records’ ‘Alliance Series’ and follows Marissa Nadler and Stephen Brodsky and Uniform and The Body.

As its very title suggests, ‘Monolith’ is a pounding heavy piece the detritus kicked up by Thou’s shuddering low end efforts sending great big balls of grime into the ether with Emma’s clean vocals fighting for air against the combined forces of Thou’s unforgiving grooves and the additional forces of Brian Funck’s screeches.

On ‘Out of Existence’ the screeched cries are of the fingernails down a blackboard variety with Thou injecting, by their own reserved standards, something approaching a swagger to their playing. With ‘Ancestral Recall’ it is Louisville singer Emma who is the more dominant partner as she switches from soft vocals to harsher sections.

While clearly on the surface there’s an existential gulf keeping Thou’s thunderous sludge scripts at arm’s length from Emma’s at time wispy vocals. Andy Gibbs of Thou could though spot the potential of this unlikely liaison and when it comes together as on ‘Ancestral Call’ you begin to understand his reasoning.

Louisville singer Emma has a distinctive voice that can carry through more than one style and even when Thou’s concertinaed chords threaten to take over the Louisville singer is able to respond in kind with her own measured tones bringing balance and poise to Thou’s at times vicious vista.

Thou and Emma are perhaps not quite as far removed as some would first suspect. They certainly veer towards the darkness and that undercurrent of destruction and decay surfaces on the likes of the bleak ‘Magickal Cost’.

The spinetingling nine-minute album closer ‘The Valley’ makes for a sumptuous climax, opening with gently swaying melodies which are then joined by Emma’s ethereal tones. This is no sugar-coated closer though as lyrically the agonies of both mental and physical torment are laid bare reflected in the intensity levels building towards the end.

May Our Chambers Be Full is released today, 30 October, via Sacred Bones Records 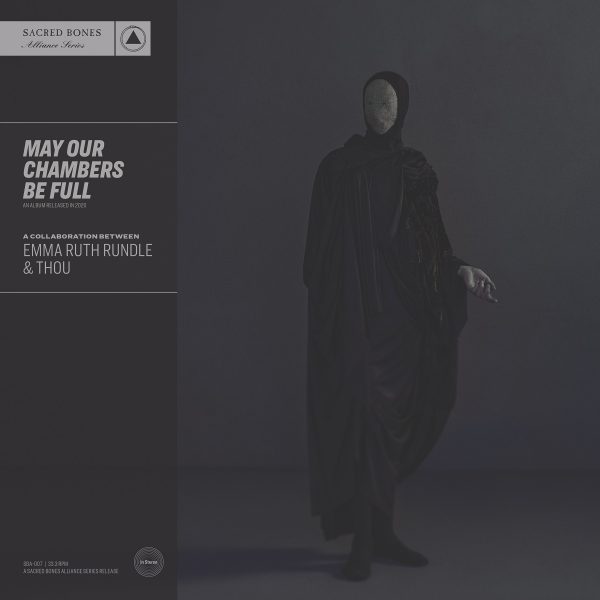