Weaned on a musical diet of the Clash, The Smiths and Johnny Cash, Emily Capell has also absorbed the diversity of her native North West London. Thus, her debut full-length, Combat Frock, is a pleasing amalgamation of ska, blues, punk and indie and she effortlessly straddles these genres by delivering songs that explore not only the mundanity of modern life but also celebrates its exuberant elations.

‘101 Walterton Road’ opens Combat Frock as all good openers should; bold as brass (literally) with an insanely catchy riff that’ll ensnare you within the first 10 seconds. With a beat so contagious you’re left with little choice but to buckle up and enjoy the ride. Effervescent, it’s a song that captures the euphoria of a Friday afternoon or a Saturday evening and it’s an earworm of the highest order that’ll bury deep into your cranium and haunt you for days. ‘No Worries follows and let’s face it, we’ve all been annoyed by trendies wearing Nirvana T-shirts obviously purchased from Primark, well ‘No Worries’ takes a swipe at said people. It’s typical of the lyrical astuteness contained within Combat Frock but it’s also Emily’s filter: like the keys to the kingdom, cool musical references permeate the album which only music obsessives will catch. If you’re not the kind of person devoted to music, you’ll probably miss them.

Emily Capell could be described as the musical offspring of Billy Bragg and Amy Winehouse; her lyrics veer between wry observations and righteous indignation yet they’re wrapped up in gloriously danceable tunes. Case in point being ‘Pinching & Itching’ with it’s calypso feel that’ll have all but the infirm up and grooving and ‘Bombs to the Beatles’, a real celebration of music replete with Desmond Dekker style brass section. A cross between Bragg’s ‘Milkman of Human Kindness’ and Rhoda Dakar’s ‘The Boiler’, ‘Who Killed Smiley Culture?’ finds Combat Frock taking a darker, sinister turn and provides a nice counterpoint to the more upbeat numbers.

It takes a real artist, a Lowry or a Morrissey (more on him later), to find the beauty in everyday life and next track, the bouncy ‘Bonanza’, certainly fits that bill. It is a sobering tale of class division and it’s a song for anyone who has constantly flaked out in front daytime telly. ‘Ipso Calypso’ and ‘Joey’ power the album forward with a punky ska vibe and while Emily’s influences are easily discernible, she remains a pleasingly difficult artist to pigeonhole. A bright and shiny brass section coupled with a strong backbeat renders ‘Joey’ extremely likeable as it does on the following ‘Twisting on the Waves’. Repetition is used to great effect on ‘Lunatics on De Run’ with its saxophone that recalls ‘Let’s Dance’ era Bowie. A song for anyone who has become disillusioned with the loose-cannon Morrissey, ‘Ode to Uncle Moz’ closes the album and, performed as an acapella, it ensures Combat Frock ends on a rather stark, sombre tone (albeit wrapped up in dark humour). A record of many shades and colours Combat Frock could be the album that propels Emily Capell into the mainstream. 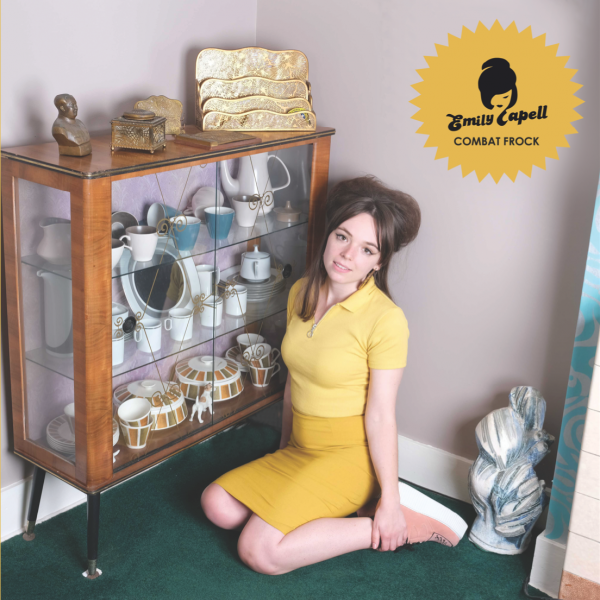