Having your debut single shoot to the top of the Billboard Charts and define a generation can be a blessing and a curse. Sure, it can raise your profile to unprecedented levels, but it can also set an unobtainable standard and that’s exactly what happen with EMF and their intoxicating anthem ‘Unbelievable’. Nevertheless, this Cinderford combo have left a tantalising trail of vinyl, the latest of which, Go Go Sapiens stands as a career best and rivals their early efforts.

Despite several hiatuses EMF are back with a vengeance and Go Go Sapiens (their first album in 17 years!) is the sound of a band with their eyes set firmly on the future. It’s a contemporary album, which exactly the sort of album a band of EMF’s vintage should produce. However, they haven’t completely severed their roots and the first few notes of opening track ‘Started It’ couldn’t be anyone but EMF; emanating as if from another dimension, it’s a hypnotic number that marries ‘60s psychedelia to a metronomic, electronic beat, yet it’s been melded by more mature, wiser heads. EMF are ageing gracefully and they’ve reinterpreted their classic sound for the new millennium.

The album’s lead single ‘Sister Sandinista’ is a spiky, angular affair that swaggers with post-punk posturing and is a call-to-arms that’s accompanied by an equally kitschy video but beneath all the sigils and sloganeering there’s a killer riff that renders it instantly memorable. Existing somewhere between Wire and The Pixies ‘Sister Sandinista’ is a jet-propelled rocket that carriers the listener along in its slipstream. Benefiting from a wide and expansive production Go Go Sapiens has a lot of goodness buried deep in its mix and will reward repeat listens (preferably through headphones) as those treasures slowly float to the surface.

The great thing about being a band of EMF’s heritage is the artistic freedom that comes with that tag. Chart placings are rarely a consideration so the group can concentrate on pleasing themselves and their fans and Go Go Sapiens does exactly that. Tracks such as ‘We Are The Free’ and ‘Keep It Coming’ have a tight-but-loose feel, an almost free form sensibility, that could veer in any direction. Throughout the years EMF have never lost their ear for a catchy beat and they don’t come much more memorable (or danceable) than album closer ‘Sparks And Flashes’. Blasting off into the future whilst paying homage to the past it suggests there’s more to come from this Gloucestershire mob.

EMF’s fourth album Go Go Sapiens is an album that’s been produced with little regard to current fads and trends and subsequently it sounds timeless and is guaranteed to sound fresh many years from now. 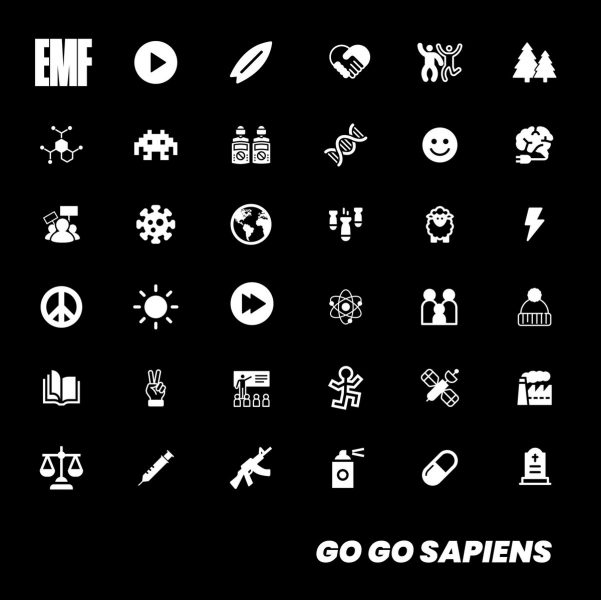