Elles Bailey is delighted to unveil 18 new Autumn and Winter dates for 2021. 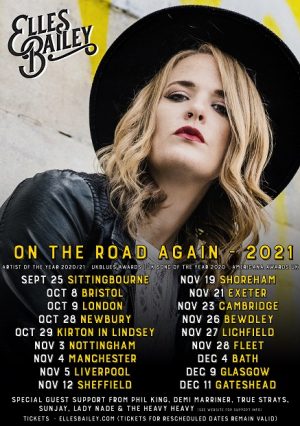 2020 started with a bang for the super-smoky-voiced, hard-working, far-touring chanteuse Elles Bailey when “Little Piece of Heaven” written with storied Memphis and Nashville giant Bobby Wood, & Dan Auerbach (of The Black Keys) picked up ‘UK Song of the Year’ at the UK Americana Awards.

As a self-confessed ‘rolling stone’ – Elles continued her wide-ranging headline touring throughout the UK and Europe in 2019 and early 2020 as well as being special guest support for Grammy Award winner Mike Farris, The Kris Barras Band and King King. She also shared the stage with Beth Hart at Ramblin’ Man, The Temperance Movement at Swing Wespelaar and appeared at Nashville’s Americana Fest as part of the ‘House of Songs’ collaboration.

Despite the global pandemic Elles has continued being the hardworking performer she is, doing many live streams including playing Joe Bonamassa’s Album Launch Stream, dropping a critically acclaimed, award nominated, live album ‘Ain’t Nothing But’, raising money for various charities, campaigning for Women in Music, picking up another 3 nominations in the UK Blues Awards 2021 and going on to win Artist of the Year for the second time in a row.

She will be featuring at selected festivals throughout the summer of 2021 including Red Rooster, A Headline slot at Cheltenham Music Fest and The British Country Music Festival and Touring shall begin again in October (covid restrictions permitting). And 2022 is looking bright – she will be releasing her brand-new studio record, touring Europe and joining Joe Bonamassa on his Keeping The Blues Alive at Sea Cruise.

“An Outstanding Follow Up from this Extremely Talented Artist” Maverick