Elles Bailey — multi-award-winning, smoky-voiced, genre-crossing chanteuse and committed tourer and champion of live music – continues her ever-upward arc. Elles is the very first artist to be signed to peermusic (the largest independent music publisher in the world) via Under The Apple Tree (UTAT) (the label co-founded by music and broadcasting legend ‘Whispering’ Bob Harris), spearheading a brand-new, music publishing, joint venture.

What’s more, following her recent win at The UKBlues Awards — where she was awarded UK Blues Artist of the Year for the second year running— Elles is delighted to announce U.K. festival appearances and her own headline touring in the near future, now that COVID restrictions are being lifted.

Nigel Elderton (President, Europe & Managing Director, peermusic U.K.) and Bob Harris (co-founder of Under The Apple Tree/Executive Director, UTAT Publishing) announced the signings. “Bob continues to be a trusted guide to millions of music fans,” said Nigel Elderton, “When he champions artists, you can bet that they have a special ‘it’ factor. We’re thrilled to be working with Bob, Trudie, and Miles on our Under The Apple Tree publishing venture and warmly welcome the incredible Elles Bailey and Jonny Morgan to the peermusic creative family.”

“I am proud and happy that Elles Bailey and Jonny Morgan have become the first artists to join us at Under The Apple Tree publishing in our joint venture with peermusic,” said Bob Harris (of Under The Apple Tree), “We are honoured to welcome Elles and Jonny to the UTAT/peermusic family.  Their music is very special.  We are building for the future.”

Elles herself is both delighted and honoured: “I’m incredibly privileged to be the first signing to the brand new UTAT publishing division, brought to you by peermusic. Bob, Trudie and Miles have been hugely supportive of my career to date, but to officially join the UTAT family and to have their belief in me as a songwriter and an artist is such an honour. I look forward to working together on our collective vision and am very excited about what the future holds.”

Self-confessed ‘rolling stone’ Elles called her sophomore album ‘The Road I Call Home’ for a reason. She really DOES call the road her home. Touring and live performance have helped build her rep and fanbase, along with highly-successful album and single releases and airplay. She’s toured the length and breadth of the UK, into Europe, and crossed the Atlantic to play tour dates in the USA.

In the past few years, bar lockdown, Elles has been playing over 100 shows a year, including touring with Grammy Award-winning Mike Farris, Kris Barras, and Martin Harley, as well as making her own headline tours of the UK and Europe. Elles Bailey has also moved up festival listings, becoming a featured artist at key festivals throughout the UK and Europe (including Black Deer, Swing Wespelaar, Ramblin’ Man Fair & The Great British R&B Festival; not to mention slots at Nashville’s Americana Fest 2019).

Now that COVID restrictions are being lifted, Elles is looking forward to getting back on the road this Summer and her headline tour between 8th October and 11th December. Check Elles’ website for full details and updates. (https://www.ellesbailey.com/)

There’s also a treat for Elles’ fans as she’s sharing the acoustic video to ‘Stones’, which she contributed to the UKBlues Awards recently. Featuring some sweet slide guitar from Joe Wilkins and Elles’ trademark vocals, so perfectly suited to such material, this was recorded live at Production Park during the Covid 19 Pandemic. Stones was written by Elles Bailey, Tamara Stewart and Will Edmunds. Enjoy! 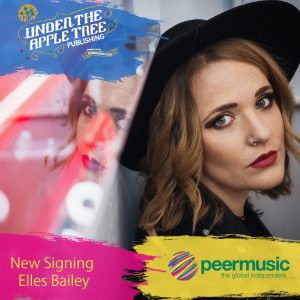 NOV 26 BEWDLEY MUSIC IN THE HALL