Bristol-based, multi-award-winning, genre-crossing Elles Bailey is releasing the video for her single ‘Cheats and Liars’ written with Ashton Tucker: the very first single to drop from her forthcoming album ‘Shining in the Half Light’, due for release early, 2022.

“This song was born in darkness, desperation and isolation, in a time where information was fed to us by the media before hearing it from those “in charge” and I wanted the Video to represent that. To be all alone in the half light yet surrounded by this “media noise”

It’s a song with a deepfelt message, given a big, building sound that draws on Elles’ rich timbre and expressive vocal power, defying simple pigeonholing as it strides confidently across genre boundaries. There are country and americana touches, particularly in Joe Wilkins’ excellent guitarwork, but at times in the choruses you might think you’re listening to a James Bond title track, so powerful, assured and engaging are Elles’ vocals and songwriting, the musical phrases, and Dan Weller’s production.

Elles’ song fiercely champions those in the Arts who were often ignored or marginalised during the time and hardships of the pandemic and directs righteous anger against “…the people in their ivory towers who made us feel like the arts don’t really matter, and to go and retrain. 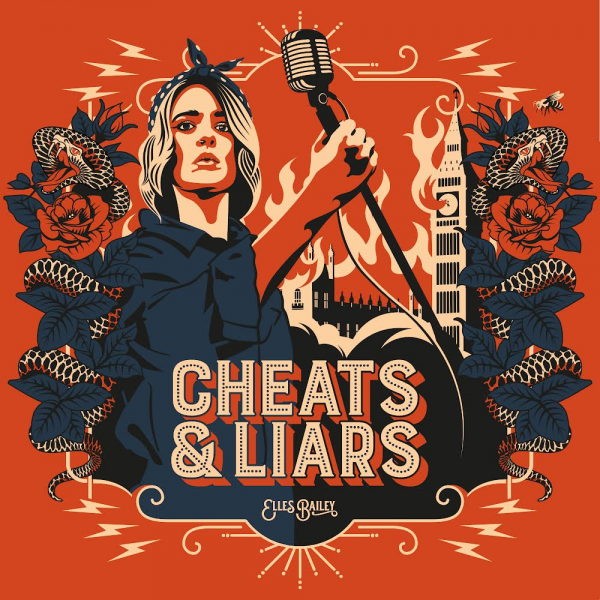 ‘Cheats and Liars’ has already earned airplay and critical praise. The single enjoyed a world exclusive on ‘The Blues Show with Cerys Matthews’, on BBC Radio Two and has also been added to Planet Rock’s A – playlist is currently the 10th most played track on planet Rock.

“Incredibly listenable, filled with passion and that feeling of injustice,” said Music News, awarding ‘Cheats and Liars’ 5 stars, “one of the best singles I’ve heard this year and it suggests her upcoming album will be something very special.”

“The chorus is huge, building the power, drawing everyone in as we relate to every emotion and word Elles sings on our behalf. This has to be the single of the year” Bluesdoodles

Elles co-wrote every new track on her forthcoming album, working with a rich array of collaborators. She then recorded the album in isolation at Middle Farm Studios in Devon, with her band and new producer Dan Weller, and completed it just before she gave birth to her first child. Listening to final mixes whist in hospital! “This album is about finding a new perspective, about learning to be comfortable with a different version of myself, the one without the road, the show, and the splendour.“

She may not have been able to call the road her home during lockdown and COVID rules, but Elles Bailey’s creative fires have still burned bright and inspired strong, new material, which ‘Cheats and Liars’ spearheads with serious style. Out now, on all digital platforms.

Elles will be hitting the road in autumn 2021 with her full band but two live shows will feature all the musical collaborators from the album. On the 8th Oct in Bristol and the 9th October in London. Catch this 8 piece never been seen before Bailey extravaganza! This will be something very special.

Other tour dates are :