The ever hard working Elles Bailey has remained visible during lockdown both in hosting her own radio show and in putting together a series of themed live streams. Her latest release Ain’t Nothing But highlights two of those streams, “lyrics” and “blues” and will be available on 11 December. Blues, Country, Americana are just some of the genres that Elles has been attached to but in truth she brings her own unique take to all of the aforementioned with her soulful voice added in for good measure.

Ain’t Nothing But perfectly showcases Elles talent for diversity as she moves effortlessly through legendary tracks from songwriting greats such as John Prine, Stephen Stills and Tom Waits along with more recent classics such as ‘Crowded Table’ from the excellent Highwomen. It might be tempting to view this as something of a stop gap before her next album of original material but as we have come to expect from Elles she is passionate about her craft and this really comes across, nowhere more so than on the tender version of ‘Angel from Montgomery’ that was of course written by the late John Prine who tragically passed earlier this year. Elsewhere it is great to hear Elles take on the mighty ‘Ain’t No Love In The Heart Of The City’ and the fiery version of ‘You Can’t Judge A Book By It’s Cover’. Clearly both Elles and the band had a terrific time performing these sets and hopefully we can look forward to seeing them back on the road in the not too distant future.

We caught up with Elles to find about more about the album and what else she has planned:-

You played a few COVID secure gigs a month or so back. Can you share with us what the experience was like both for you and the audience?

We had a string of Covid secure dates and managed to make two of them before the National Lockdown. What I loved about the whole process was actually how everything seemed so normal. Backstage, the band and I slipped easily back into our roles from 7 months previous, Matt tucking into the rider, Jonny and Joe chatting about their over night bags (yes they tend to do that a lot – so rock and roll!!) and I had taken over the dressing room, my stuff everywhere. Everything was as it should be…. and then we had the five minute warning and I started to get excited, and then when I walk on stage and saw the audience I cried…. it was so overwhelming. Not realising how emotional I would feel, I had made the mistake of starting just me and piano and my whole body and my voice was shaking. Honestly though – it was such a crazy amazing feeling, I can’t even describe it. After months of trying to make connections through as cold glass screen, to actually have an audience was unreal.

It’s obviously been incredibly frustrating that gigs have not been possible for much of 2020 but I notice you have had the chance to host your own radio show. How are you enjoying the experience of this?

Yeah this is an interesting experience. I have really enjoyed tucking into loads of new music and finding new artists as well as revisiting some of my favourite tracks. It’s been a great distraction to the situation we all find ourselves in

How did you go about choosing the cover songs for this album? It’s great to see not one but two John Prine songs on there, he was such an inspirational songwriter.

This release came out of a livestream series I did in July & August, and reflects 2020 for me – the year of the livestream. When touring you get to play the same set list every night. But if you livestream often you cannot do that. So I came up with a themed series – three different livestreams. The first called ‘Ain’t Nothing But The Lyrics’ paying tribute to incredible songwriting, the second being ‘Ain’t Nothing But Elles Bailey Requests’ where my fans curated the set list, and then the final stream was ‘Ain’t Nothing But The Blues’. This record is a snapshot of the first and third shows, a ‘best of’ you could call it. For me, choosing the first 7 songs was really easy actually (the lyrics portion) as they are songs that have become entwined in my soul over the years, and with John Prine being one of my favourite writers, I had to play two of his. 8-16 (the blues portion) was slightly harder however I am really pleased with the choices in the end. Can’t Judge a Book By its cover was a last minute addition suggested by Joe Wilkins, who features on every song and that was such a great, energetic way to close the shows.

One song that stood out for me was ‘Crowded Table’ from the terrific Highwomen album which features some incredible individual artists. Would you welcome the opportunity to be involved in a collaboration like this if the opportunity ever arose?

Collaboration is such a beautiful thing so if I every get an opportunity like this I would love it. Watch this space….. :P

Did you consider anything by Jason Isbell for the covers set? It would certainly be interesting to hear your take on something like ‘if We Were Vampires’.

I love Jason Isbell, especially that song. I didn’t consider any Jason for this project but never say never! ‘Cover me up’ blows me away every time I hear it.

Finally I know you’ve shared some exciting personal news recently on Twitter! So tell us about your plans for 2021 (as much as any of us can make plans at the moment)…

Well yes – its going to be an interesting 2021 and I will be taking at least ….two months off touring once Baby B arrives, however, you can expect some new original music in early 2021, then a new album and a tour later in 2021 and fingers crossed a summer filled with festivals….oh and baby sick, I think there will be a lot of that haha…!! 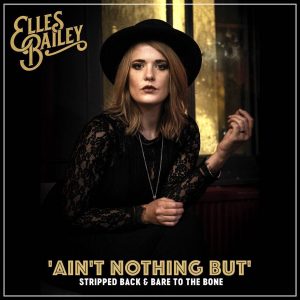