Wizard Bloody Wizard is not the name of the next JK Rowling bestseller, fortunately. It is of course the latest album from the wonderful Electric Wizard whose downtuned doom delivery has inspired countless other acts over the past three decades. The foundations of the band are husband and wife partnership of singer and guitarist Jus Oborn and fellow guitar player Liz Buckingham. Between them they have written some of the most jaw-dropping UK doom overtures of the past quarter of a century, Funeralopolis and Satanic Rites of Drugula among them.

Wizard Bloody Wizard is Electric Wizard’s ninth studio album and befitting a band whose songs invariably last into double figures, it contains just six songs. Oborn and Buckingham’s commitment to the original Sabbath/Witchfinder General approach sees them record using all analogue equipment in their own Satyr IX Studio in deepest Dorset. It’s fair to say that the word ‘digital’ does not figure large in the Electric Wizard style guide.

As with most of their output down the years, the focus remains on horror movies, Ouija board spinning tales from the occult with a healthy measure of sex worked into the flared and fuzzed 70s vibe for good measure. Electric Wizard have refused to play catch-up with the modern world, and their musical template remains firmly planted back in the days of Chopper bikes and power cuts. As usual the fuzzlines are thicker than a Tom Selleck tache and the rumblings lower than Jimmy Hill’s chin.

While the grooves are so heavy you almost need reinforcements to pick them up at times, the prevailing ambiance is far from monosyllabic. The tunes just roll effortlessly from this release, arguably making Electric Bloody Wizard a more far-reaching, inviting, album than some of their previous work. When Oborn discussed the album prior to its recent release, terminology such as ‘heavy rock’, ‘Blues’ and ‘boogie’ filtered through the conversation, rather than simply showcasing dark and depressive doom as a reference point. 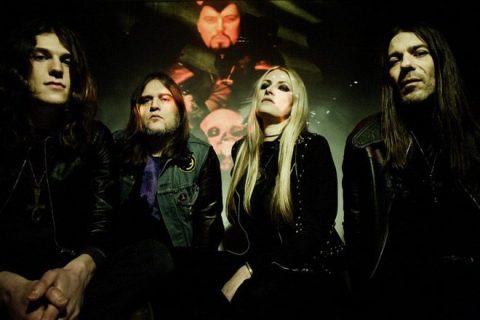 ‘See You In Hell’ sets things moving nicely, a mid-tempo opener that takes a while to really get going but when it finds its stride the methodical heavy thuds start to fall nicely into place as the pieces come together. ‘Necromania’ is much more vivid, as Jus waxes lyrical about ‘red lips and leather’ before ultimately espousing… ‘death or pleasure, Necromania.’ The guitars are coated in grime and Liz’s luxurious grooves flow effortlessly with Clayton Burgess supporting with his deep growling bass, leaving new recruit Simon Poole to maintain the pounding beat that seals the sound together.

‘Hear The Sire’ is probably the heaviest piece on the album, with a beating rhythmic pulse that you can take without even applying the monitor. If you’ve any loose tiles then lower the volume as this will surely cause the grout to crumble. ‘Hear The Reaper’ is that rarest of sightings, a short Electric Wizard song, although in reality this is little more than some spacey hallucinogenic ramblings. ‘Wicked Caresses’ is a more slovenly offering, with Jus sneering away in almost lip-curling fashion like a sulking Liam Gallagher or John Lydon.

Album closer ‘Mourning of the Magician’ is the longest track at around 11 minutes and it’s one on which the heavy sombre doom overtures almost seep through its pores as Jus barely raises a vocal over a somnambulant groove. Momentum builds satisfyingly and steadily throughout and when Jus cries ‘I’ll see you in Hell,’ you almost feel tempted to make a note in your diary.

While Electric Bloody Wizard in all honesty falls a little short of one or two previous albums, including the 2015 release Time To Die, it is still a worthy addition from the darkened Dorset catacombs.