Nothing short of a priceless gem.

Within the disparate and dispossessed land of the doom disciple the name Electric Wizard carries something not far short of mythical status. Aside from Sabbath themselves, who else has been producing such suffocating Satanic sounds for 35 years? And while the UK doom scene is currently healthier than a five-a-day lean as a bean long distance runner – take a bow Alunah, Conan, Slabdragger etc – Electric Wizard still have the power to cast a spell of such bewitching sorcery that few could ever come close to holding a flickering candle against.

After a period in the wilderness – which of course is no bad place for a doom band to hang out – Electric Wizard, on the back of their exceptional new album Time to Die, have almost been reborn. One of the most appealing traits of these Dorset doomlords is their sheer bloody-mindedness. Compromise is not a word that comes naturally to them. It’s their way or no way and on Time to Die it’s one anvil pummeling thud after another with the sound swung so perilously low it almost comes spilling out of your boots.

The mood is black with death as a cursory glance at the first couple of song titles will confirm. This is a one way ticket to the depths of darkness from which no soul stirs again. The core of Electric Wizard remain husband and wife team of singer Jus Oborn and Liz Buckingham. Since their last album, the 2010 release Black Masses they have recruited bassist Clayton Burgess from Satan’s Satyrs. There have also been some comings and goings in the drum department. Regular stick swirler Mark Greening, came back to the band having left previously to set up the excellent Ramesses. Unfortunately no sooner had he played his full part in the recording of Time to Die that old wounds erupted once more and Greening again departed, this time to be replaced by Simon Poole for his second spell with the band.

The album is peppered with crackly wireless announcements of youthful dismeanours most of which centre on drugs and demonic worship. One such broadcast provides the unsettling intro to album opener ‘Incense for the Damned’. When this song takes off it does so with the force of a ballistic missile even if the speed it is travelling at is of a considerably steadier pace. But while the tempo is sedate the mood and fire within are burning with the intensity of a busy day at the crematorium. Ashes to ashes…

Jus Oborn ‘s distinctive drone dominates as always with his delivery positively painful in places while all around him the coffin-layered cacophony casts a mindblowing spell that sends you under quicker than Paul McKenna. The hallucinogenic harvest that feeds so much of what Electric Wizard furrow is not so much hidden under the rug as shouted from the rooftops, the endlessly repeated sojourn of ‘Get high before you die’ eventually bringing an epic 10-minute opening track to a peak. The overwhelming hood of darkness and death that smothers this release is again prevalent on the very next number, ‘Time to Die’, the join of which from the opening song is almost seamless.

Electric Wizard manage to navigate their way through the tripping riff terrain without faltering in their stride. ‘Time to Die’ aches like a bent over pensioner hobbling to the post office on pension day. The sound of pain filters through accompanied by a devilish bassline while the drums at times barely resonate over Liz Buckingham’s solos. At just over 11 minutes ‘I am Nothing’ is the longest track. As the title suggests this is a soulless cold as ice assault on the senses opening up with a riff so heavy and intense it’s likely to rip the face off your speakers, so be warned.

Against a monotonously dense bass that slowly drills into your brain, Jus wails the title above an ever more fragmented din. This is the epiphany of emptiness and pretty much captures the deep and desolate landscape that Electric Wizard frequent. ‘Destroy Those Who Love God’ is technically an instrumental although the psychedelic fuzzed up thread is again permeated by disjointed satanic mutterings, a young boy is heard calling ‘Almighty Satan, destroy those who love God’. If Electric Wizard occasionally let the reigns loose then it’s on ‘Funeral of Your Mind’ which opens with a greater tempo and develops into an almost rocky number, albeit one cluttered with deep distortion and more fuzz than you’d find at the end of the day on a barber shop floor. ‘Sadio Witch’ – a four-minute gallop by their standards – is also less oppressive than some of the Wizard’s classical monolithic material

The lost voices are revisited on ‘We Love the Dead’ which takes an eternity to reach its full height. The demonic riff that sounds throughout is the kind of sinister whine that you may stumble across on an old black and white Hitchcock movie as the unsuspecting innocent transcends a cobweb covered spiral staircase to what we all know will be a painful and merciless end. Further homage is paid to Old Nick on ‘Lucifer’s Slaves’ with Jus so laid back with his languid delivery that he must be perilously close to toppling over, expunging ‘we are the antichrist’ over a sprawling decadent sheet of blinding noise. After almost two decades with Rise Above Records, Electric Wizard opted to release the album on their own label Witchfinder Records, via Spinefarm. Time to Die is nothing short of a priceless gem. It will be dug up in a thousand years and whoever plays it will fall under the blackened curse of Electric Wizard. 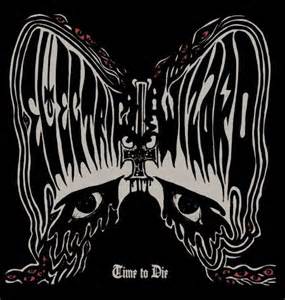