Last millennium. The British Invasion of the USA was not only a prolific and creative time for post-war pale-skinned white boys from Surrey, it also helped reinvigorate interest in America’s homegrown musicians, with due respect given to the likes of the mighty Howlin’ Wolf, Muddy and the Kings, leading to some of them earning a decent living, and when royalties went their way, possibly a pension. That holy trinity of guitarists that sprang from The Yardbirds led to nearly every scruffy kid who played a six-string gaining notoriety over there, some still being revered to this day. Somehow, lost in the mix, was America’s homegrown white boys. Their reputation held high for a while, but lacking cosmopolitan panache, the likes of Paul Butterfield, Mike Bloomfeld, Elvin Bishop, J. Geils and Johnny Winter perhaps never truly translated internationally in the way they should.

Possibly, it was because they played a purer form of the blues that didn’t translate as well to British dance halls. Maybe they preferred the land of the brave to catching a plane and playing over here and gaining a larger audience. While it’s true, white-haired albino and ultra-thin whizz-kid Johnny Winter, put in some European-time and made fans, a hellfire lifestyle curtailed productive activity here for many a year, then just as his career was gaining traction once more, he passed away while on tour in France, back in 2014.

His brother Edgar took it hard, naturally. A fellow albino, prejudices drew the siblings closer, as did a love of music. While Johnny played the blues Edgar supposedly favoured jazz, in fact his wings spread further as the hit singles ‘Frankenstein’ and ‘Free Ride’ proved; a multi-instrumentalist including saxophones and keyboards, as a vocalist he’s been said to influence singers as diverse as Dave Lee Roth and Ian Gillan.

The surviving Winter brother kept being asked to pay tribute to Johnny on record and elsewhere. His time for grieving lessened he began to dedicate the last part of his shows to him, then latterly came the development of this record. It has not been rushed, and it shows.

We’re used to seeing a list of famous names appear on tribute records, but this time it sounds like most of the guys involved weren’t just signing in, there are some considerable contributions. Its also very apparent how well this has been project managed by Edgar Winter, not only getting the right kind of people involved but standing back himself a little when others might shine a light on a song better than him.

If music begins with rhythm, Winter ensured those sitting behind the drum stool were the best. With rare exception Gregg Bissonette is the man hitting the sticks, Ringo Starr beats time on what’s probably my favourite track on the album, and Kenny Aronoff lays down percussion and a timbale solo on a couple. Bass duties are pretty evenly shared out between Bob Glaub and Sean Hurley, and a who’s who of US guitarists fly their nation’s flag proudly, with members of both the Doobie and Allman Brothers pitching in here and there, alongside those from Little Feat, ZZ Top, The Eagles, Toto, Bon Jovi and the Foo Fighters.

Now, I’ve heard a few Johnny Winter numbers in my time but I’m by no means an expert, so sifting out which are tracks written by him, covers that were part of his repertoire, and a few written specifically by Edgar for this record isn’t easy. Ultimately, however, it doesn’t really matter, what you really need to do is sit back, listen, enjoy and pick out your favourites.

Opening track ‘Mean Town Blues’ showcases Edgar’s voice in a most appealing tuneful snarl over a prime steak up tempo boogie rocker. Its repetitive hardened guitar riff kicks like an angry bucking bronco, while a slide guitar slowly makes its presence known and takes you safely round the rodeo a few times. I latterly found the guitarist was Joe Bonamassa and he serves the song well. Edgar felt it was important to get this track right, evoking as much of his brother’s power trio style as he could, I’d say it rocks harder. This version was released as a single, close to what would have been Johnny Winter’s 78th birthday.

‘Still Alive And Well’ has Kenny Wayne Shepherd attending to lead guitar work and Phil X on rhythm over this mid-paced blues, while ‘Lone Star Blues’ features Keb Mo on guitars, predominantly acoustic and contemporary sounding, being written by Edgar and also released as a single. Billy Gibbons takes over vocals for ‘I’m Yours And I’m Hers’ and he delivers a rougher live holler, over a steaming blues featuring charismatic slide by Derek Trucks, with Edgar’s keyboards leading the way in for Gibbons to play the guitar solo. Even if the song is not familiar to some, a few of the lyrics will be, the blues vocabulary being a shared one.

We can argue over which was the first ever rock ‘n’ roll song until the cows come home and milk themselves, but Chuck Berry’s ‘Johnny B. Goode’ has to be one of the most overplayed covers. Johnny Winter’s live renditions could race at 100mph, his slide guitar skidding round the bends like a joyrider during some major time changes. Here we have some lovely fluid guitar from Dave Grissom, while Joe Walsh and Phil X back Edgar on vocals, and the latter gent’s piano rolls out a lovely sound throughout, while his sax solos proved a delight. Frankly, I think they’ve reclaimed this song from all the naff bar bands and all-star jams of the last 60 plus years.

Next up, ‘Stranger’ proves absolutely beautiful. Joe Walsh takes up his guitar and gracefully reaches some magical places, turning in phrases of utter emotional brilliance, while Edgar accompanies him on piano, Mellotron, and synthesiser with an overall L.A; cool elegance, handing over the ballad’s vocals to Michael McDonald. This is way beyond just yacht rock sophistication.

On a roll, ‘Highway 61 Revisited’ gets a turn, and I swear those of us who aren’t Dylan freaks will finally learn all the lyrics thanks to Edgar appropriating a crusty old Southern ranch-hand rock hollering vocal delivery. His brother’s interpretation was a raging slide-fest and while Doobie Brother’s multi-instrumentalist John McFee applies that tool, alongside Kenny Wayne Shepherd returning on lead, our attention is as much held by Little Feat’s Billy Payne on organ and Edgar on piano.

Both Winter Brothers have previously covered ‘Rock ‘N’ Roll Hoochie Koo’, and featured its composer guitarist Rick Derringer in their bands. Here Tim Pierce and Phil X crunch down on the funky rock riff, then Steve Lukather plugs in and pulls out pretty much every sonic attack trick you can think of and they all fit in perfectly, making a good sound better. In need of more passive reflection, we have the acoustic blues of ‘When You Got A Good Friend’ with Doyle Bramhall on guitar.

If ‘Johnny B. Goode’ is the most over-covered number in rock ‘n roll, ‘Jumpin’ Jack Flash’ stands close in its shadow. Having played with the good and the great, and a partner-in-crime to Keef himself, Waddy Wachtel can be relied on to lay down the immortal guitar lines. It’s the song that made Jagger rock’s first priapic megastar, Johnny’s versions were less about the lyrics and more about how he could swirl guitar themes in, here Edgar gives it gusto and muster, stomping and screaming away, and when he calls out “Rock and roll” it’s the cue for Phil X to take up Lukather’s baton and start showing what he can bring to the table, and it’s impressive. There is also timbale solo from Aronoff and a bass one from Bob Glaub. Plus, aside from the solo, Phil X adds backing vocals, as he does elsewhere, and, impressively, you’d swear there was a group of female vocalists on those tracks he does.

‘Guess I’ll Go Away’ has become all the more poignant in light of Foo Fighters’ Taylor Hawkins recent passing, as he sings on this one. It’s a 70’s hard rock take on the song, and in this rendition wouldn’t be out of place on a Foghat or even early Kiss record. By contrast, ‘Drown In My Own Tears’ is a jazzy ballad. Here, Winter’s piano placements and understated asides are ever inventive, while his alto sax leads a heart horn section, he even throws in a bit of scat singing for good measure.

With ‘Self Destructive Blues’ it’s more obvious Bonamassa’s on this one, aside from him taking vocal duties, it’s another rocking blues boogie with some swift fingered guitar soloing, and while brasher than Johnny Winter’s rendition it goes off in all the right places. Much covered, and often by female singers of note, ‘Stormy Monday Blues’ certainly gives a singer something to wrap their voice around, often to histrionic proportions – While Edgar Winter reads it more than well here, it’s simply a song that, try as I have done many a time, I can’t get overly enthusiastic about.

Johnny Winter produced Muddy Waters’ celebrated comeback album Hard Again back in 1977, among others, and he had more in common spiritually with the blues giant than a lot of others who’ve made such a claim. Waters first covered ‘Got My Mojo Workin’’ in 1957, here the band give the song a good time dance jive beat, Bobby Rush delivering some heartfelt harmonica alongside a witty and winsome vocal rendition, with a couple of Doobies Brothers chipping in on the chorus.

‘End Of The Line’ is a fitting coda to this album. A piano ballad with string section, it pretty much says it all in the title. Under driven, it could be a bigger more bombastic power ballad in other hand, here it retains something of an older school jazz feel to it.

A tight, precise studio album, that’s right for the times. Harder rocking in some cases, and while less likely to go off wandering down those less-travelled creative guitar paths Johnny Winter often did, one simply cannot complain about the work Joe Walsh, Steve Lukather and John McFee bring to the table, while Phil X’s contributions are also worthy of note. Edgar Winter remains unique, and this album reminds us of his considerable talents as singer, musician and band leader.

There are a number of stand alone good tracks on Brother Johnny, but it has been crafted in that traditional manner where songs are placed for mood and contrast, so that you play each and every one with a growing appreciation of those songs less initially familiar; many becoming warm friends you may come to treasure. 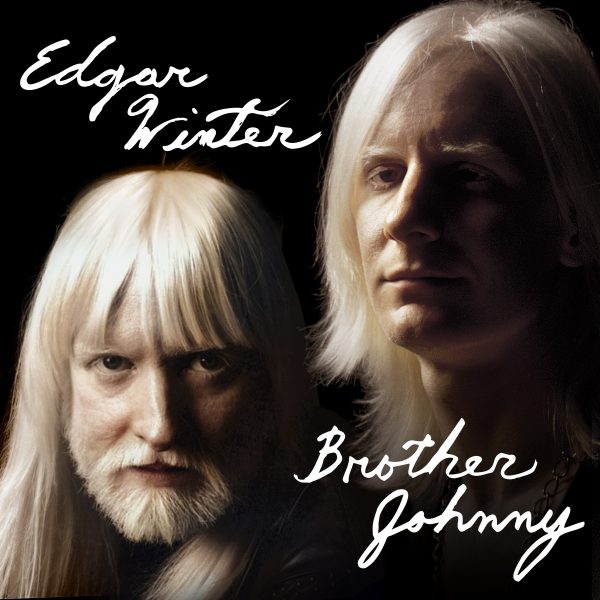