Formed in 1975 from the fertile Canvey Island scene Eddie & The Hot Rods’ high-octane brand of R&B positioned them, quite rightly, as the missing link between pub and punk rock. Originally released in 2009 New York: Live finds the band in their element and this reissue stands as a fitting tribute to recently deceased (and much missed) vocalist Barrie Masters.

Opening with the title track from their debut album, ‘Teenage Depression’ finds Eddie & The Hot Rods hitting the ground running. It’s a fine slab of high octane proto-punk that’s all wrapped up in squealing guitars and thudding drums. Barely pausing for breath ‘I Might Be Lying’ follows hot on its heels before the twin guitar attack of ‘Quit This Town’ explodes like shrapnel from a cluster bomb. The heavy rhythm and blues of ‘Telephone Girl’ really stomps with its chugging riff and is paired with the equally vibrant ‘Life On The Line’. The stage raps are kept to a bare minimum meaning there’s more time for great tunes and the band deliver them in spades with ‘You Should Have Been There’ and ‘The Power And The Glory’ following in quick succession.

This is a warts-n’-all live album with no overdubs and the tape left running, which is exactly how the Hot Rods should be captured. However, by the time New York: Live was recorded the band had a stable line up and on this evening, they were firing on all cylinders. Case in point being ‘Why Should I Care Anymore’ which finds Barrie’s oak aged voice in fine fettle and drummer Simon Bowley, something of a beast behind the kit, hitting the skins particularly hard. There’s an obvious chemistry on display with six stringers Richard Holgarth and Chris Taylor trading some incendiary riffs while ever present bassist Ian ‘Dipster’ Dean anchors the sound.

While Eddie & The Hot Rods influenced hundreds of punk bands they never (unlike the punks) turned their backs on their influences and, perhaps attesting to their pub rock roots, ‘(I’m Not Your) Stepping Stone’ is the first of several covers in tonight’s set. But the band are blessed with plenty of original tunes (as good as anything they covered) as the pairing of ‘High Society’ and ‘Hard Drivin’ Man’ attest…and I swear you can almost see the amps smouldering! Two covers follow in the shape of The Who’s ‘The Kids Are Alright’ and a garage-tastic version Them’s ‘Gloria’ before we reach the call-to-arms ‘Do Anything You Wanna Do’. The type of song for which the term ‘classic’ was coined it, quite naturally, sets the venue alight, as do encores ‘Get Out Of Denver’ and ‘Born To Be Wild’.

Recorded live at Brooklyn’s Southpaw venue New York: Live succinctly encapsulates what was great about Eddie & The Hot Rods from their adrenaline-charged live show to their amphetamine infused cover versions. It also makes a fitting tribute to the late Barrie Masters. Raise a glass… 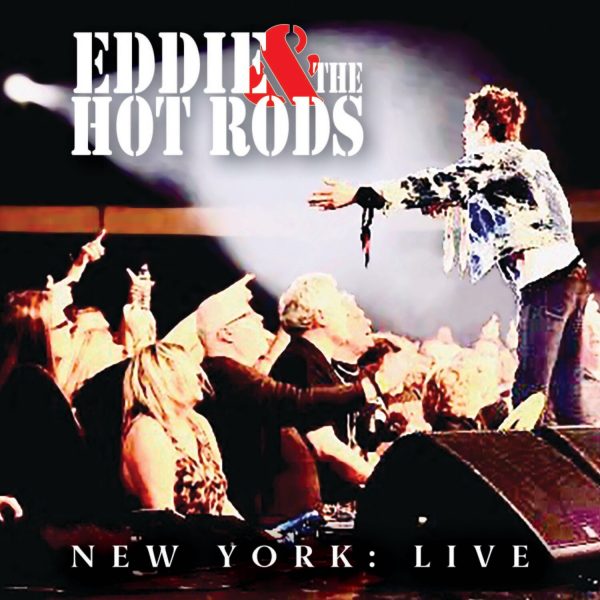