The Eagles – Don Henley, Joe Walsh and Timothy B. Schmit, with Vince Gill and Deacon Frey – return to the U.K., bringing their highly anticipated and critically acclaimed tour to the American Express presents BST Hyde Park on Sunday 26th June and other UK cities throughout June 2022. For BST Hyde Park show, they are joined by special guests Robert Plant and Alison Krauss, and the full line up is to be announced.

Performing classics spanning across their career, including “Hotel California,” “One of These Nights,” “Life in the Fast Lane,” “Desperado,” and many more, the tour begins on June 17th in the Netherlands at Arnhem’s, Gelredome Stadium, before making stops at Liverpool’s Anfield Stadium, Edinburgh’s BT Murrayfield Stadium and Dublin’s Aviva Stadium before closing at London’s BST Hyde Park. Tickets for BST Hyde Park go on sale 9am on Friday 5th November. Tickets for the 2022 U.K. and European tour dates go on sale 9am on Friday 5th November. 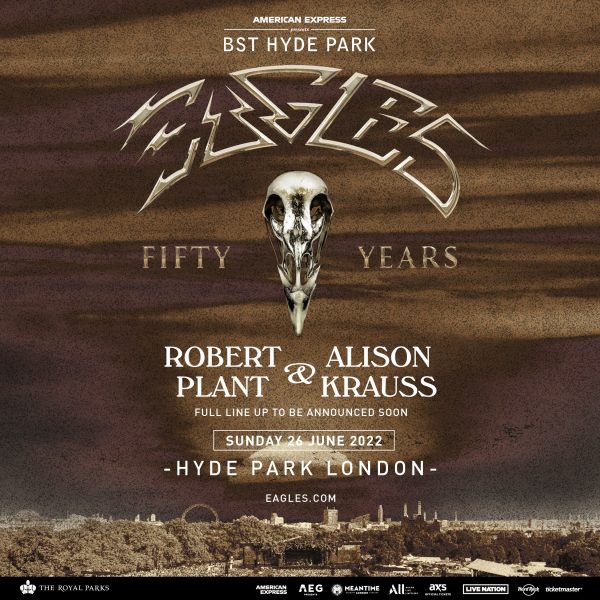 In today’s faddish, fractured, rock landscape, the Eagles retain an appeal that transcends both generation and genre, cementing the band’s role as enduring musical icons. As the best-selling American band of the ’70s, and one of the top-selling acts of all time, the Eagles have sold more than 200 million albums worldwide, scored six #1 albums and topped the singles charts five times. They have won six GRAMMY® Awards, were inducted into the Rock & Roll Hall of Fame in 1998, in their first year of eligibility, and received the Kennedy Center Honors in 2016. The RIAA recently certified Their Greatest Hits 1971-1977 as the best-selling album in history (38-times Platinum) and Hotel California as the third best-selling album (26-times Platinum).

Iconic, timeless, and unmissable, the Eagles return to London and the U.K. in Summer 2022.

One of rock’s greatest frontmen Robert Plant & 27-time Grammy-winner, Alison Krauss join this incredibly special Hyde Park bill. The pair first collaborated nearly fifteen years ago when they released Raising Sand, one of the most acclaimed albums of the 21st Century. In addition to winning all six Grammy Awards for which it was nominated it was also certified double platinum in the UK.

Now, after fourteen years, the two icons return with Raise the Roof on 19th November, a dozen songs from a range of traditions and styles that extend this remarkable collaboration in new and thrilling directions. The accomplishments of Robert Plant and Alison Krauss, of course, are immeasurable. But with Raise the Roof, they take the next step in a project that offers them creative rewards unlike anything else and Hyde Park will be one of the first places to experience it live. Their 2022 tour dates are to be announced.

Tickets are on general sale from 9am, Friday 5th November at bst-hydepark.com
Ticket prices start at £74.95 + booking fee

For complete information on the tour, visit Eagles.com.