Kindred spirits Dystopian Future Movies and Grave Lines have joined forces for this three-track EP in which the personnel interchange almost like pieces being moved across a chessboard. The first two tracks were recorded in Nottingham’s ‘Doom Room’ which also gives you a little insight into what to expect.

First up are Dystopian Future Movies who contribute the song ‘Beholden’, a languid slowburner infused with a captivating groove over which singer Caroline Cawley’s clear delivery adds poise and panache. There’s a healthy swagger in evidence here from the Nottingham outfit, thoroughly merited through Caroline’s warm vocals with Grave Lines’ frontman Jake Harding supporting with backing vocals. A thunderclap triggers a more visceral twist in which everything is intensified, emotions are closer to the surface with an absolute adrenaline rush of a chorus.

Caroline and Jake then form a harmonious collaboration on ‘Dead Sleep’, which is far removed from what we’ve come to expect of the Grave Lines frontman. In contrast to his familiar sinewed strains smothered in supercharged sludge explosions we’re treated to a swooning ballad on which Jake’s bluesy baritone blends effortlessly alongside Caroline’s soft lilt. The only accompaniment is courtesy of the piano, sympathetically played by Bill Price (also of Dystopian Future Movies). It’s an intimate and delicate arrangement that invites comparisons with the Nick Cave/Kylie Minogue musical union of almost 25 years ago.

Completing the triumvirate are Grave Lines in their more familiar form, although the initial scene-setting strummed flurries of ‘False Flame’ are again low key. This time it is Caroline’s turn to offer some ethereal vocal twists in support of Harding’s grasscutter tones. With Julia Owen’s steady percussive beats adding just a hint of dark menace it’s left to man-mountain Oliver Irongiant to open up the range with his measured but incisive guitar work. Finally, at the halfway stage of the 10-minute track, Grave Lines reveal their abrasive edge, Irongiant’s cascading grooves suddenly becoming more urgent as Harding abandons the soft whispers in favour of more urgent anguished cries.

In summary this is an enlightening EP between close friends that showcases their multiple talents to great effect. It might be an oxymoron to suggest much fun was had by all participants at the ‘Doom Room’ but nevertheless the dark underbelly that flows through all three songs makes for a compelling and enjoyable listen. The two bands shared a stage for a few dates last month in promotion of the EP and by all accounts were greeted with near religious fervour by appreciative audiences. That comes as no surprise. 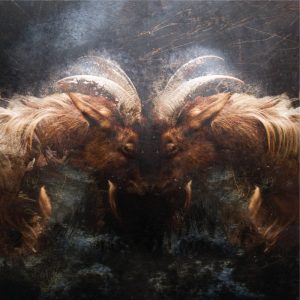