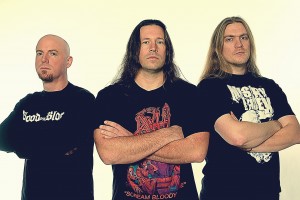 DYING FETUS have been confirmed to play the 2014 edition of the mammoth rock gathering, Download Festival. The death metal powerhouse will play alongside headliners Aerosmith, Avenged Sevenfold and Linkin Park at the festival that takes place in June at Donington Park, Derbyshire.

Public pressure for the band to be added to the line up has been mounting since Monday, when in response to Metal Hammer’s announcement of Avenged Sevenfold as headliners, one disgruntled fan questioned “Why not Dying Fetus?”. A social media whirlwind has followed, with #whynotdyingfetus trending on various social platforms.

John Gallagher (Guitar, Vocals) comments:
“The people have spoken and now it’s time to piss in the mainstream! This started as a joke but has turned into something truly incredible! Never under estimate the power of the internet. Big thanks to all our undying fans for making this happen and for the promoters of Download for having the courage to invite us on the fest! Cheers!”

“When #whynotdyingfetus started circulating on Monday, it gained too much momentum to ignore, so calling the band and asking them to play at next year’s Download was a no brainer. I’m thrilled to say that they seem as excited about it as we are. ‘Why not Dying Fetus?’ you asked. We say ‘Why the hell not?”

Metal Hammer journalist, Merlin Alderslade, who composed the original piece online about fan reactions to the headliner announcement, added his support to the band’s appearance on the bill:
“This only goes to show once again that the internet is a) An immensely powerful tool and b) Really, really silly. Luckily, in this case, it’s all happened for a genuinely great band and I don’t think anyone is doubting that Dying Fetus will be a crushing success at Download.”

DYING FETUS have just completed an extensive run of North American tour dates, following on from a successful European tour this summer which took in London and a headline slot on the SOPHIE stage at Bloodstock Festival.

DYING FETUS released their latest album Reign Supreme in 2012 on Relapse Records. The album is streaming in its entirety on their Bandcamp Page.

A video for the song Second Skin is available for viewing here.

Reign Supreme is available for purchase from the Relapse store here and digitally on iTunes.

The original Metal Hammer article can be viewed here.