Hard work, determination and an appetite for victory…

A band that need no introduction – and a band that made me scream ‘I Wanna Rock’ – the first hour of this documentary We are Twisted Fucking Sister sees the coming together of the legendary rock band that is – obviously – Twisted Sister. There’s background information of the band, there’s the costumes and there’s the fallouts that so often occur with musicians, but it’s not enough. Or so it would seem when compared to the myths that surround such titans as Guns ‘n Roses or Metallica. Here, there are a few rock ‘n roll stories but nothing that is on the same kind of scale as those legendary legends.

But there’s a different tale here. The second hour of the documentary is where things start to pick up, for me anyway. There’s some great live footage of the band playing and this is where the excitement of Twisted Sister comes together. As a live act they are incredible. And, most significantly, the band is not afraid to admit when things have gone wrong. For instance, when they saw a drop off in their fan base, we see how they go about fixing the problem that bands could easily give up on and spend an age whinging about on social media.

Dee Snider comes across as optimistic and someone that you can relate too. He’s the ultimate outsider, a rebel if you must, but for all the right reasons. There’s a tale here of success and the hard work that goes into it, an edge to this documentary that any modern band could – perhaps even should – relate to. There’s more than a band in this film. It’s about a team coming together and fighting the fight that they sang about for their whole career. The footage of their slot at the 1982 Reading Festival exemplifies this struggle. Bottled by an unappreciative audience, where today’s darling stars would walk off (yes, I have witnessed this first hand, the band waltzing off the stage protected by X amount of security guards), Dee takes on the crowd and makes a stand. The result? They steal the show, gain new fans, and, tellingly, nobody rose to Dee’s challenge.

Though the first half an hour drags a little – admittedly that’s down to me expecting an explosive sex, drugs and rock ‘n roll story from start to finish – it starts clicking and the  pieces come together. Twisted Sister maintained their success because they – legendary frontman Dee Snider in particular – consciously avoided the trappings of the grand old tale of sex, drugs and rock ‘n roll that we glorify at every turn. Twisted Sister has long been the under-dog, and in some ways they still are. Did they care? Well, maybe a little, but they just kept on keeping on against all the odds. It was their determination, their hard work and, more importantly, their lack of an appetite for destruction that goes so often with the territory of rock ‘n roll that made them the band that we know them for. Perhaps this is the success story we should be celebrating rather than the tragedies (or should that be comedies?) that we so often praise. 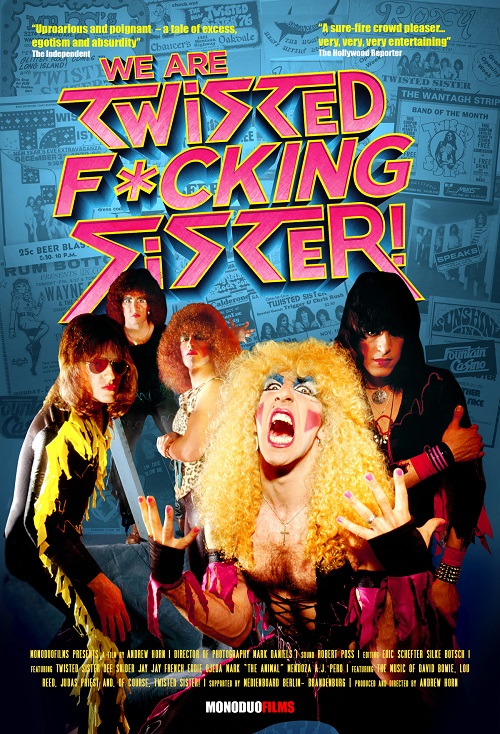