Australia’s favourite ratbags, DUNE RATS have announce their fourth album will be out 24th June 2022.

The second single from ‘Real Rare Whale’ and follow up to the triple j Hottest 100 fav ‘UP’ is also released today. ‘What A Memorable Night’ is an ode to those mornings full of blurred glimpses of the night before.

The band explain ‘What A Memorable Night’: “We wrote this song as a tribute to all of the memorable nights that we’ve had with our close mates. The ones that none of us can really remember, but the skewed stories, whether right or wrong, always outlive the memories”.

The video for ‘What A Memorable Night’ lined up with the perfect opportunity to have a party. “We shot the drinking part of the video on BC’s birthday – the most memorable night of the year! Then filmed the performance clip with a crew of legends from Hype Republic, who we met filming a movie called Six Festivals which we’re super psyched about.”

‘Real Rare Whale’ is DUNE RATS 4th long player and follows on from their consecutive #1 ARIA albums, 2020’s ‘Hurry Up And Wait’ and 2017’s ‘The Kids Will Know It’s Bullshit’. Recorded with acclaimed producer Scott Horscroft, the band relocated to Eden on the south coast of New South Wales for three months at the height of the pandemic and set out to write an album that was opposite to the negativity going on in the world. The result is an album full of fun and melodic rock n’ roll.

“Real Rare Whale is hands down the fastest, funnest and most insane album we’ve ever recorded,” the band said on recording the album. It’s an album that expresses the love of music and writing songs. Songs that will be epic to play live to thousands of sweaty bodies having a great time. We waited until now to release it as we know it won’t be long until shows start back up and we can be where we are meant to be, on stage having fun.”

“From the first track to the last, each song was written with the sole purpose of being the “other songs” to what we were hearing on the radio,” they continued. “The songs to forget about what was going on at the time and reflecting on what made us start being a band in the first place. Teaming up with Scott Horscroft, who has long been a friend, was a dream come true. We respect him so much as a producer that we knew he was the person to bring depth to these tunes whilst keeping them in the Dunies ethos.”

If there’s a surrogate fourth member of DUNE RATS it would be artist Lee McConnell who has worked with the band on their art direction over their last two albums. Lee returns with incredible art for ‘Real Rare Whale’. On working with the band for album #4 Lee said: “With the sense of this album being super fun and really just wanting create a good time, the artwork needed to be bold, colourful and fun to match. One night Danny told a story of ‘Old Tom’ a famous Orca from the area who was around in the early 1900’s who was famous for his co-operation with the local fisherman. With ‘Old Tom’ being a rare whale during his time and the album born in Eden it seemed fitting to call the album Real Rare Whale. A title which was so fun to run with. Another character was born into the ever expanding world of Dune Rats. It’s always a fun journey for me creating artwork with the band. I’m super proud of it and can’t wait for everyone to enjoy it,” he concluded. 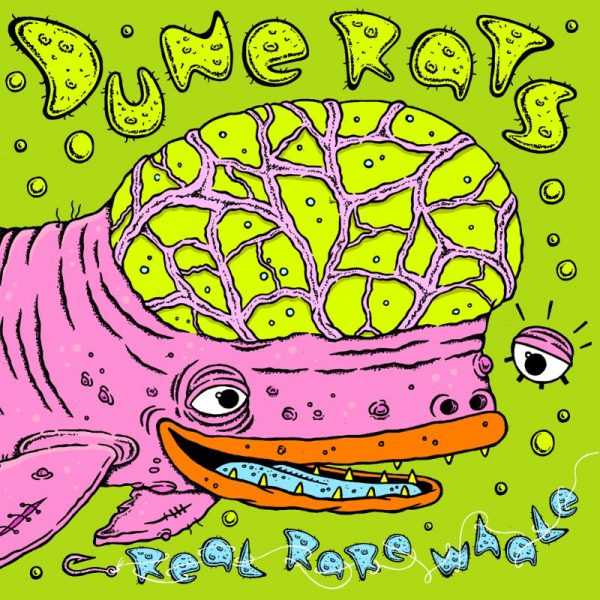