So, as you can see, Dumpstaphunk have something to say…and why wouldn’t they. But this album is no polemic (well, it is, but it isn’t), it’s joyous, it’s positive, and it grooves like a melon farmer!

Dumpstaphunk, for the uninitiated, have been around for 17 years now and are major players on the jam band scene. A New Orleans band through and through, formed by Ivan and Ian Neville (sons of Aaron and Art respectively), they play a thrilling mix of rock, jazz and, obvs, funk. ‘Where Do We Go from Here’ is their first studio album in 7 years and their most political and pointed to date. So, let’s put on our dancing strides and see what we’ve got here.

‘United Nations Stomp’ get’s us off to a funk rock start. An old Buddy Miles song, it get’s a suitably Hendrixian treatment courtesy of guest guitarist Marcus King. It would have sat happily on ‘Band Of Gypsies’ and gives the band ample opportunity to flex their muscles straight off the bat, easing into a loping jam.

Then we head off into groove territory, and a vast expanse of territory it is. Most of the songs here are basically launch pads, setting up the necessary frameworks for extended jams. ‘Make It After All’ is prime jazz fusion, complete with the obligatory slap bass and timely positive lyrics and, yes, a chance to stretch out.

There are also several killer instrumentals. ‘Backwash’ is all about the funk and is as NOLA as you’d expect. Brimming with Hammond organ, groove follows effortless groove, the band working as a communal unit, no-one taking centre stage or overshadowing anyone else but then, as with all the best funk, it was always about group effort. ‘Dumpstamental’ meanwhile, takes it’s cues from 70’s soundtracks, on several occasions almost morphing into ‘Starsky & Hutch’. They could do this all day, and often do.

Even when the message is downbeat – “there’s no guarantees in this thing called life” – this album still manages to feel positive. Never give up, never give in, everything’ll be ok. The 8 plus minutes of ‘Where Do We Go from Here’ is just a gleeful groove, that’s all, but what wouldn’t you give to be in the Basin Street bar where this was going down.

‘In Time’ is a woozy, restless Sly Stone cover while ‘Sounds’ ratchets up the guitars for a seriously bruising rock out. We finish with the album’s most overtly political track, ‘Justice 2020’, which has become an unofficial anthem for the American social justice movement. Could an album be any more timely? Released virtually as Derek Chauvin was being found guilty, it’s a rallying call, “this isn’t justice, this is disgusting” snarls a righteous Chali 2na at one point. It’s tragic that music this angry and determined still needs to be made.

There’s a deliberately retro sound to this album. It sounds like it could have sat alongside James Brown’s 70’s socio-funk classics, and the fact that they are as needed now as they were then is the truly shocking take away from this fine album. African-Americans are fighting exactly the same fight now that they were back in ’71. Sometimes it feels like not much has changed but at least, now as then, the accompanying soundtrack is mighty. Important grooves. 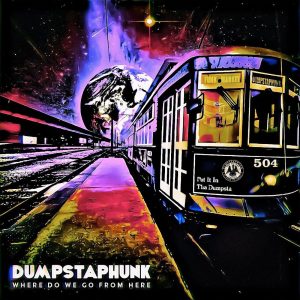