Drivin N Cryin‘s previous album, The Great American Bubble Factory (2009) told tales of factory shut downs, empty pockets, foreclosures and the death rattle of the American Dream. Its stirring mix of politics and rock’n’roll – post millenium reworks of the sixties’ protest song – had a cumulative emotional power. It was a long way from their tilt at the Billboard top forty, with Fly Me Courageous in 1991.

This time the bruising meditations make way for a more reflective tone. Mainman, Kevn Kinney’s always said that he “wants to capture America changing”. But with this heavyweight blue vinyl version of Live The Life Beautiful he’s been searching his own soul, dressing his philosophical perspectives in an unrivalled set of poetic and allusive lyrics… documenting his escapes both from the small town strictures of his youth (‘I Used To Live Around Here’), and from the addictions he acquired over the years (‘Step By Step’).

By this point the vinyl effect has hoved into view. On each track we get the full picture . . . an uncompressed landscape of valve driven ambience . . . analogue clarity unhindered by a loss of audio data. Some bands just sound better on vinyl.

The indelible tattoo of the band’s southern rock/Americana blend is branded deep into the mournful opening track ‘Free Ain’t Free’. A last remaining carry over from …Bubble Factory, with Kinney launching into a keening vocal refrain on the back of a spoken word polemic. Not for the first time on this record will you hear echoes of the guitar driven sixties folk/country/rock dynamic of The Byrds and Buffalo Springfield, as it goes out in a blaze of endlessly duetting guitar glory. Already we’re edging forward on our seat, anticipating the next move.

Kinney flips the rhetoric on one of the pivotal tracks, ‘Whats Wrong With Being Happy’, an ode to the youthful simplicities and honest values of the past, hinting obliquely at survivor’s guilt. Then takes us through the evocative subjects of filial love (If I’m Not There I’ll Be here) and the illusory nature of fame (Someday), two key tracks that kick off the album’s soft centred second half. They close with ‘Over And Over’, a sweet look back in the rear view mirror, and the very personal but startlingly relevant ‘Sometimes I Wish I Didn’t Care’. The aching vulnerability of Kinney’s vocals on these two tracks sets the seal on a significant shift of focus, from the downtrodden and disenfranchised of … Bubble Factory, to the here and now, and an examination of life seen through the prism of hard won knowledge.

As fresh testament from one of rock’s great survivors, Live The Love Beautiful shows Drivin N Cryin scaling yet another creative peak. 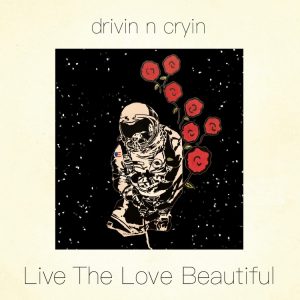