Who? Well, yes. You may very well ask. Dramatis was a British synthpop band comprised of musicians from Gary Numan’s backing band from 1979 up to his poorly-judged and short-lived “retirement” from touring in 1981: Chris Payne on vocal and keyboards, Rrussell Bell on guitars and keyboards, Cedric Sharpley on drums, and Denis Haines on keyboards. Releasing six singles and one album between 1981 and 1982, Dramatis didn’t last very long. Of the six singles, only ‘Love Needs No Disguise’ featuring Numan on vocals, reached the top 40, no doubt because of Numan’s presence on the song, in the promotional video, and his name being blatantly displayed on the single’s front cover. As for their 1981 album, For Future Reference, released through Elton John’s label, The Rocket Record Company, was bought by die-hard Numan fans but it failed to chart. The band had the look (or at least a look), they had the musicianship, and they had a bunch of songs that sat squarely within the popular cultural tastes of the era, and yet, being so closely associated with Numan appears to have done the band more harm than good. With the New Romantics fast on the rise and bands like Duran Duran embracing the glossy opportunities that the image-dominant MTV culture offered – coupled with a phone call from Numan’s mother to rejoin him as his backing band – Dramatis got left behind.

Overshadowed, overlooked, the musicians would abandon the project and all except Haines would continue to work with Numan, appearing on most of his 80s solo albums and accompanying him on tour, their presence at his side dwindling over the years as Numan slowly sank into his mid-80s-to-mid-90s creative slump. And as the album would drift off into the sea of vinyl leftovers of the era, the band’s name would descend further into the footnotes of Gary Numan’s biography and the dusty ‘who cares where they are now?’ section of the museum of 80s pop history. That is, until the year 2000, when some record label would repackage it under the title The Dramatis Project by ‘Tubeway Army featuring Gary Numan’ in a preposterous attempt to mislead new and old Numan fans into believing that they had unearthed some hitherto unreleased material. It went nowhere. Unsurprisingly. Though the untimely passing of Cedric Sharpley in March 2012 from a heart attack put an end to plans to reunite the band, in 2019 Rrussell Bell and Chris Payne announced a new Dramatis single, ‘The Torment of Angels’ (listen and buy it here), and that work on a new album was underway. And Cherry Red Records are giving the album the reissue that it deserves and, most importantly, the opportunity to give the material the chance to stand on its own merits.

The album has plenty of hooks, catchy choruses, and an array of atmospheres and soundscapes woven into its ornate arrangements. Futuristic and sci-fi, melancholic and dramatic (of course), there are elements of classical music intertwined into the 80s electronic pop aesthetic. What’s apparent across the album is that the band were very much aware of the inevitable comparisons that were going to be made with the works of their previous employer. Other than the Numan-lead ‘Love Needs No Disguise’, the tracks that were to become singles – opener ‘Oh! 2025’, ‘No-One Lives Forever’, and ‘Ex Luna Scientia’ – are strong, each having their own character and demonstrating just how good a singles band they were. All of the tracks exhibit the strength of their musicianship. This was a band that knew each other, a band in dialogue with itself, a band that worked towards a common end and deployed its strengths when and where necessary, urging itself forward, encouraging and exploring itself as it grows.

And though it is very much an album of its time, there is a progressive element across the album that suggests that had the band developed across these lines, they could have produced a second album of more adventurous material, the potential for which can be heard in the later singles. Also of particular interest is the concert recording from 1982. Studio recordings of pop, even in the analogue days of the 80s, were very tight, tempos rarely waivered, and performances were note perfect. Dramatis maintain the tightness of the studio recordings on stage and imbue them with an energy that is vibrant and affective. Here we hear a band that had honed its skills on stage, in rehearsal rooms, and in studio after studio, year after year after year. And this release, 40 years after the band’s first appearance, raises questions about what Dramatis would have become had they continued. Now that Rrussell Bell and Chris Payne are working under the Dramatis name again, we may well find out.

2 CDs packaged with a history of the band, a bunch of images and press releases, the stories behind the songs, and an interview with Rrussell Bell from January 2020, this is well worth the asking price.

Disc One: For Future Reference 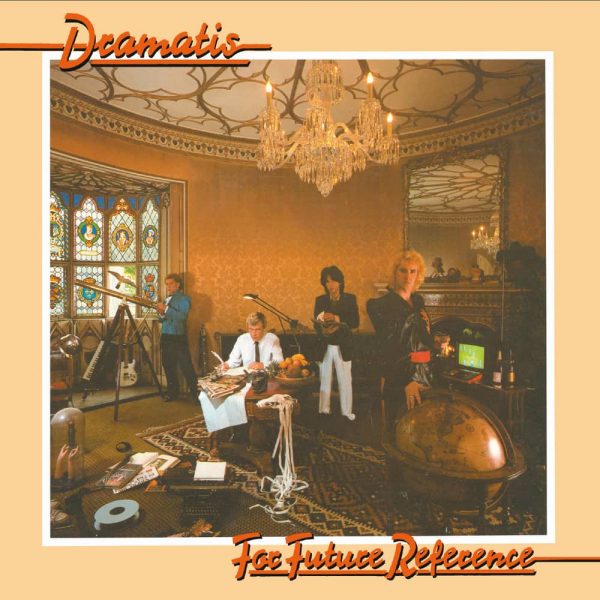