Opening duo McRocklin & Hutch are a pleasing tension of opposites that oscillate between Thomas McRocklin’s organic guitar, Hutch’s surgical synth sound and a love of ‘80s rock. These sounds were once diametrically opposed but McRocklin & Hutch marry them effortlessly as frenetic shredding nestles next to evocative passages and while Thomas prowls the stage with cool calculus Hutch indulges in animated headbanging. Rock fans over a certain age will remember Thomas “McRocklin” McLaughlin as the child guitar prodigy and I’m pleased to report that his skills have aged like fine wine. Furnished with a great sound which the put to good use ‘One of Them’ and ‘All I Want From You’ evidence a lot of variety which renders them entertaining and avoids their set becoming a music lesson. 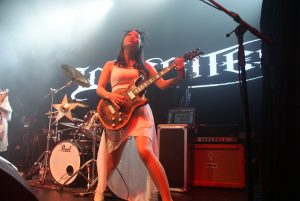 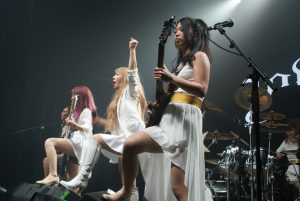 Attired all in white and arriving like avenging angels Japan’s Lovebites are all smiles and are genuinely excited to be in Birmingham. ‘The Hammer of Wrath’ sees them get off to a flying start and fairly thrashes along with guitarists Midori and Miyako trading blistering solos much like Messrs Murray and Smith in their prime. Without pausing for breath ‘Pledge of the Savior’ follows and, perhaps evidencing Miyako’s musical training, has a real grandiose, neo-classical feel. ‘Rising’ is up next and those who only know Japanese music through the vapid idol scene would surely be shocked by Lovebites musical prowess. This band can really play and they proceed to deliver a full-on 40 minute foot-on-the-monitor metal fest. 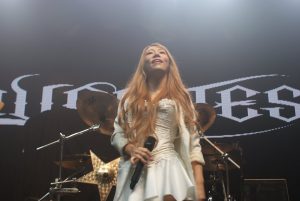 ‘Above the Black Sea’ and ‘Shadowmaker’ finds plenty of follicles flying along with horns held on high. The tight rhythm section of drummer Haruna and the finger picking bassist Miho keep the sound grounded whilst Asami’s angelic vocals float atop. The new track debuted, ‘Signs of Deliverance’, bodes well for the forthcoming album and has fans salivating before ‘Under the Red Sky’ and ‘We Are United’ brings their set to a suitably crushing crescendo. 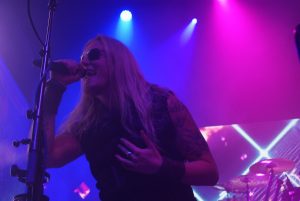 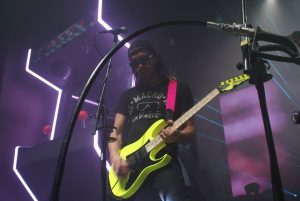 Famed for their spectacular live show an air of expectation hangs heavy as we await tonight’s headliners DragonForce. The tension is amplified by an elongated introduction that stretches some present to breaking point. It’s finally released when the instantly recognisable riff of ‘Highway to Oblivion’ begins and the band hit the stage amid an explosion of ticker tape and laser beams. A recent sojourn across the States has oiled the bands gears and tonight they’re in fine fettle, using every inch of the stage they’re a blur of activity and a riotous cornucopia of sound and colour…and it’s still the first song! ‘Fury of the Storm’ follows with vocalist Marc Hudson firing a faux flame thrower at the crowd then we’re into ‘Last of the Dragonborn’ with it’s Far Eastern flourishes as huge plumes of smoke are unleashed to herald the arrival of ‘Ashes of the Dawn’. The band are flanked by two oversized retro arcade games and are bathed in neon blue and pink for the ‘80s tinged ‘Heart Demolition’ which is a real celebration of metal and magically turns a rainy Wednesday evening in Digbeth into Saturday night. 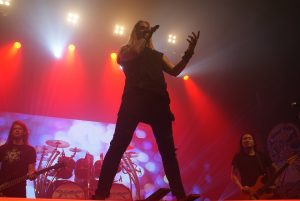 What follows is a fun filled instrumental section with Marc Hudson swapping mic for guitar to play some gaming themes and then “McRocklin” returns to the stage to play banjo (really!) and duels with guitarist Herman Li (but, thankfully, it’s nothing like the film Deliverance!). Then it’s back to the set with ‘Black Fire’, ‘Razorblade Meltdown’ and more ticker tape showering the crowd during ‘Cry Thunder’. It’s been an evening for fans of six stringers with each group displaying their virtuosity and, not to be outdone, DragonForce’s Herman Li and Sam Totman display a chemistry on ‘Valley of the Damned’ that only comes from decades of playing together and brings the set to a fitting conclusion. However the crowd demand an encore and the band are happy to oblige with their cover of ‘My Heart Will Go On’ with bellows of smoke rising from the stage and then ‘Through the Fire and the Flames’ which culminates in more smoke and streamers exploding and ensures the band depart as they arrived: in a sensory maelstrom.