Download 2014 was quieter than any major festival I’d been to. With alleged ticket sales as low as a third of capacity, it could have been a worrying sign for the future of rock and metal in the UK and yet the atmosphere was as raucous as the last few years had been.

My festival started by catching the end of Iamfire, the surprising change of direction for Peter Dolving, ex-frontman of The Haunted. Stoner/doom rock usually lurks in smoky back-rooms but the thunderous stomp of the Danes’ more classic-rock influenced breed goes down well in a mid-afternoon at Donington.

Next to grace the stage were Bristol’s finest, Turbowolf. After being holed up recording the follow-up to their frankly sensational self-titled debut, it’s no surprise that the band are itching to get playing some shows. Hot off the back of a small run of intimate dates, the Pepsi Max Stage is a veritable arena which the band comfortably fill. Despite his lack of locks, Chris Georgeiadis commands the crowd as the ‘Wolf launch into classics from their first outing alongside some new tracks including the hard-hitting ‘Solid Gold’. Alas, 15 minutes is all I’m granted before being called away for interviews. Luckily, the band is headlining one of the Download Freezes Over tours later this year, so a full set review will follow. 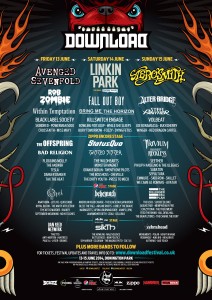 Skindred  tore up the main stage in what seems to be a string of high-profile festival dates for them of late, a testament to their widespread success.  Their new album Kill The Power seems to have been written specifically for a massive audience and, as expected, one of the most anticipated acts of the weekend brought it hard. Singles ‘Ninja’ and the title track get the crowd jumping before ‘Warning’, featuring Koie Kenta of Crossfaith, closing the proceedings with appropriate oomph.

There are few acts that can turn security pale at the very mention of their name, but Letlive are one of them, and one of the most notorious. Vocalist Jason Butler spent the day hobbling around the press area on crutches with the assistance of some of his associates. The man that strode out onto the stage, crutches in hand, to the adoration of the packed Pepsi Max Stage was, however, an altogether different beast. Throwing one crutch into the crowd and the second high over the rigging behind him, Butler led the band through 30-odd minutes of audio/visual chaos. After two songs, he even thanked security for letting him up on the stage before the barrage continued with ‘Dreamer’s Disease’. With their blatant disregard for their own safety, it’s no wonder Letlive’s live show is so notoriously anarchic.

I briefly caught both the start and end of Anathema, who’s ethereal and atmospheric brand of new prog seemed a little out of place in the lofty heights of the Pepsi-sponsored tent. Nevertheless, material from their new release Distant Satellites and the glorious Weather Systems goes down well with the three-quarter-full, canvas arena.

The highlight of the first day of Download is surely Swedish prog-masters Opeth; a band that doesn’t rely on stage setups or over-the-top acrobatics, a band that let their musicianship and songwriting ability speak for themselves. Opening with ‘The Devil’s Orchard’ from their divisive Heritage, the crowd is swiftly brought onside as live, the track doesn’t succumb to the poor guitar tone and ‘classic’ production that left many fans with a sour taste. Any hint of their newer, ‘less heavy’ direction was blown away as Mikael Åkerfeldt, the now Metal Hammer Golden God, declared, ‘I’m now going to ruin my voice for you guys’ before launching into ‘Heir Apparent’. From fan-favorite ‘Demon Of The Fall’ to the magnificently dark ‘Blackwater Park’, Opeth delve into the vaults to perform a set to delight the fans that have stood by them over the last 20 years, even now they have started to get a bit proggier-than-thou.

While Opeth were both crushingly heavy and solemnly beautiful in equal measure – as one can expect from a band with so much experience – it’s worrying that the tent was only about half-full. In years to come, will extreme metal (from which Opeth’s back catalogue delves into with aplomb) cease to be something supported by major music festivals? A worrying thought…