Fifth album in, DBA is becoming more than a side project for Geoff Downes and Chris Braide, the former having plied his trade as keyboard player with Yes, Asia and The Buggles, while Braide’s career until recently saw him based in the USA, writing and producing for the likes of Britney Spears, Christina Aguilera and Beyoncé. The results have been for want of a better term progressive pop, or a form of art rock untouched by the influence of glam – The Godley & Crème side of 10cc given a Pet Shop Boys makeover.

Rather than genuine concept albums, DBA’s records have evolved thematically, moving from the equivalent of TV soundtrack (Suburban Ghosts) to sizeable budget independent film (Skyscraper Souls). With each there’s a sense of a England lost, devoid of any Brexit context more on a personal level; the results often melancholy but enchanting. It would appear the reverse is intended here on Halcyon Days and it is a time to look back on idyllic happy and peaceful times, though musically it remains similar enough to past outings.

The notable difference is how many songs features narrations within them, and voiced by assorted individuals. It’s going to take more intense listens for me to decide if this ultimately works; currently it feels like an indifferent audiobook. Thematically we are drawn to long hot summers, first loves who’ll never be forgot, and something mythological not quite defined – Perhaps some early Martin Amis novel on an Arthurian quest to revise the memory of one’s youth. Either way, there appears no great sense of urgency, or need for any problems be resolved in psychological post-mortem.

First sing, ‘Love Among The Ruins’ cruises along in gentle lullaby, save for a brief burst of biting guitar. It’s feel-good in nature, and tends to set the scene. ‘King Of The Sunset’ acts as soundscape to a recent past, intimates ecological concerns but if there doesn’t dwell on them – Three minutes in musically it’s anyone’s guess where it’s heading as passive Genesis keyboard style melodies give way to a streaming burst of echoed guitar only to be followed by something acoustic Plant & Page picked up down in Morocco.

The first true song, as such, kicks in with ‘Your Heart Will Find The Way’. There are big hooks, a bright sound, and upbeat driven beat playing underneath. The lyrics, veer towards poetical mannerisms, but the chorus should bring a smile to those suffering post-2020 blues.

The next two numbers, Braide sings particularly well. ‘Holding The Heavens’ again draws comparisons to Genesis (their ’ Your Own Special Way’) but a song that asks if you’re busy playing Atlas, as such, how will you cope with your own emotions. Another one fit for the times we live in. Narration aside, ‘Beachcombers’ features a pretty and gentle piano-based melody with a mild white soul rhythm section easing in between the grooves – A love song wherein one is happy to drift along the beach while the madness of the world rages on elsewhere, it also features a charming Jon Anderson-like acapella section. ‘Warm Summer Sun’ follows quite naturally, its mannered classical piano stylings gelling with string synthesisers, amid assorted guest voices heard.

‘Today’, while not Lou Reed’s ‘Perfect Day’ plays in a similar wishful-thinking ballpark, without the implied heroin needs. A ballad, a distorted guitar enters without warning taking as its reference point Tony Peluso’s classic solo on The Carpenters’ ‘Goodbye To Love’ and strikes gold.

‘Hymn To Darkness’ is suitably churchlike before going all Latin on us, and ‘She’ll Be Riding Horses’ is an upbeat, summer-soaked indy-pop tune and the emotions expressed within it get deeper in ‘Late Summer’ as they invest in lyrical characterisation, leaving keyboards to affect minimalism.

‘Remembrance’ comes in at just under 12 minutes, its new age summer solstice reminiscing dragging into something of a long shopping list near the end, but musically it’s prog soul subtly for the most part, before the album concludes with the ‘Epilogue’, sadly not on the version I’ve had to review, but based on past records, possibly evoking musical themes from earlier numbers.

The verdict’s still out on the narratives, and DBA’s predilection for Roger Dean covers may appeal to Yes fans, but lose them a wider mainstream audience. Gentler than previous records, but wistful not whimsical, the partnership continues to enchant in a good many places. 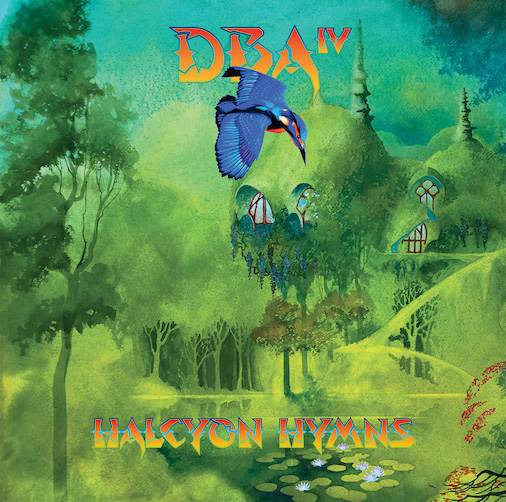