Following on from 2011’s My Re-generation album, Def Leppard frontman Joe Elliot has teamed up again with members of the Quireboys to record a second batch of Mott The Hoople tracks. The Further Adventures Of… sees a similar mix of better known and obscure tracks and, by avoiding the obvious (‘All The Young Dudes’, ‘Roll Away The Stone’, etc.), it’s all the better for it.

The album opens with the riff driven ‘Rock N Roll Queen’ and by the time Keith Weir’s piano kicks in you know you’re onto something special. While I’ve never been the biggest Leppard fan, Joe Elliot’s vocals work really well here. Given his championing of all things Hoople, it’s somewhat surprising that it has taken him this long to start this project. ‘Stiff Upper Lip’ continues the trend, giving the same production and feeling to a much lesser known song from the latter day Nigel Benjamin-fronted Mott.The album also benefits from being endorsed by several Hoople luminaries. “I’m blown away by these recordings. The solo by Paul Guerin on ‘The Journey’ is one of the best I’ve heard.” Praise indeed from Ian Hunter, and he’s not wrong. ‘The Journey’ is one of several standout tracks.

The crisp production breathes a new life to these songs, which, after all, are nearly all over 40 years old. Having been lucky enough to see the band in action attacking the songs on the last album, that same cohesiveness is apparent on the album with all the tracks standing together as a whole with odd choices disrupting the flow, and none of the tracks veering to far from the originals.

The downside of the release is for CD lovers (or just a canny bit of marketing); if you buy the CD you will need go and download the iTunes only bonus track of ‘Sea Diver’ (one of Mr ‘Unter’s best and most loved songs). Ultimately a good time rock ‘n’ roll album from a fresh sounding band that should appeal to all Quireboys and Leppard fans, while also satisfying many of the Mott faithful. Tour please gentlemen. 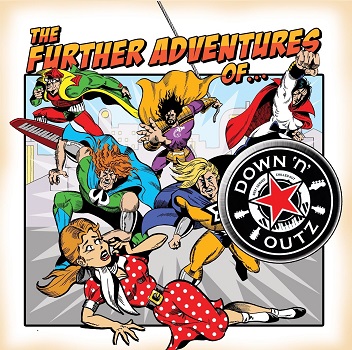