So far south they’re almost falling off the planet..

You don’t have to look under a bushel to understand the light that powers the inexorable force known as Dopethrone. Track titles such as ‘Sludgekicker’ and ‘Riff Dealer’ spell out in no uncertain terms exactly which direction the Canadians’ new album Hochelaga is coming from. Dopethrone are something approaching sludge ambassadors with their staggeringly downtuned guitars that rumble away throughout this joyous album. The hallucinogenic mindgames attributed to a plant unlikely to crop up on Monty Don’s gardening hour provide the piston to fire the Dopethrone engine. The band refer to their brash brand of riff heavy destruction as ‘weed metal’ so as not to leave anyone in any doubt.

Hochelaga is their fourth album. The previous ones have been great, and the 2012 offering III remains a favourite, but this burly beast is simply outstanding. The grooves are warmer than a newly serviced boiler, and a lot more interesting, and more infectious than a sexually transmitted disease. The kind of Canadian background from which the three band members hail is a world away from the picture postcard Rocky Mountains or jaw dropping beauty of the Great Lakes.

These dudes are city urchins. Montreal is their home but once again it’s not the clean as a whistle streets that you might see spoken of whimsically in a glossy Sunday supplement spread. Dopethrone reside in the ghetto encased by grit and grime. One such ghetto is known as Hochelaga, of which the album title pays homage to. At its most energetic on the chaotic ‘Scum Fuck Blues’, the pattern is consistent throughout, with dirty great riffs that come down and land on you with all the subtlety of 24-stone bride trying to squeeze into her wedding dress.

The rough ‘n ready trio of Vincent (vocals and guitar), Vyk (bass) and Carl (drums) have an album to go to war with. Vincent’s harsh delivery permeates every track with its whispy bark that nestles deep within the pulsing Dopethrone beat. The New Orleans sludge vibe created by the likes of Eyehategod and Down is amplified here. In fact these boys are so far south they’re almost falling off the planet. Although slow in parts Hochelaga is much more dynamic than doom. It’s battered and bruised with a crust thicker than one of your granny’s finest apple pies. 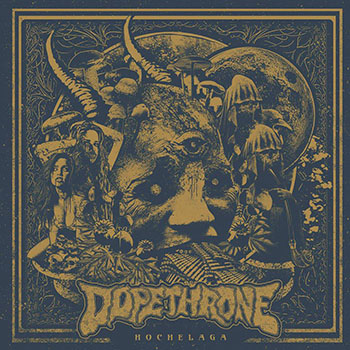