Paul Castles settles down with ‘The Whore’, the new album from Doom’s Day, released via PRC Music on January 13, 2017

What with Vladimir Putin extolling the voluptuous virtues of the Soviet’s sultry ladies of the night no doubt he’ll be well versed already with the contents of ‘The Whore’. For those of you less up to speed with what used to euphemistically be referred to as ‘Good Time Girls’ here’s your chance to get under the sheets with Doom’s Day. While very much doom in spirit, this album is far removed from the downtuned heavy trodden delivery of many who operate within this sphere. Far from it. ‘The Whore’ is a seductive slice of darkened beauty, so to speak.

Doom’s Day hail from Canada and while clearly content to operate within the walls of whatever passes for as doom they also boast a Misfits-inspired punk ethos, although to this listener that is more to do with state of mind than actual sound. Either way, the important thing is that the eight engaging tracks that more or less bewitch you from start to finish. Opener ‘Ceremonial Rites’ opens eerily enough with some haunting monastic chanting but that soon makes way to allow a more foot-tapping rhythm to take over. The song settles down into a steady doomy beginning although with melody aplenty. Welcome to Doom’s Day… but without too much doom.

‘Witch Finders’ really gets things moving, an olde worlde tale set to a riveting rumbling riff with vocals barked out, military style, supported by a dirty chug of a guitar. Album title track ‘The Whore’ opens intimately with a smooth textured groove before things take on a more dissonant form, the tempo is raised and more energy is dispelled only briefly halted by a well punctuated hook that signals the return of the marshmallow waves before the song slides out of view.

Calling a song ‘Return to the Sabbath’ invites comparisons with Ozzy and co although this is another Doom’s Day track with some poetically applied polish. The guitars soar upwards, with a few hallucinogenic solos thrown in, while vocalist, the appropriately named DooM, again just carries the track forward with his smoothly textured tones.

Despite the band name, Doom’s Day don’t feel compelled to go down the path of bootlace low downtuned monolithic slabs and songs that travel at snail’s pace. The songs from these self-proclaimed horror-punks come and go every four minutes or so, each leaving a positive impression each time. The early stages of ‘River of Misery’ stand-up well as an instrumental number but after a minute or so the whole Canadian collective join in to create another spiritually rewarding soundscape.

‘Carving the Stone’ is more of a southern fried meal, the pace defiantly slow, stopping and starting with some razored riffs to clip your beard with and a Nola inspired rhythm which when finally allowed to take off proves strong enough to pull a traction engine.

‘The House Remains Insane’ is one of the shorter numbers and doesn’t have quite the pull of the majority of the others. Final track ‘Star Of Satan’ is the longest number and opens with some gritty fist-pumping action, in what is probably the heaviest song on the album. A biting chorus ensures crowd-pleasing appeal live, while the drummer needs to roll his sleeves up for a more powerful percussive presence. With ‘DooM’ leaving the soft harmonies alone this time, it’s a far angrier soundtrack, befitting of its title.

The Whore is the third album from Doom’s Day and if you’ve not come across this creative Quebec four-piece before then this is the ideal place to start. 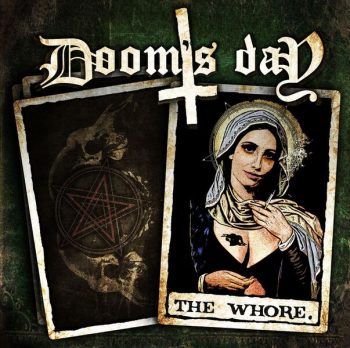