On a day when the latest addition to the Royal family was greeted with the usual flag waving bonhomie, there were no pink balloons, bottles of bubbly or party poppers to be found at the Asylum where a crowd had descended from early afternoon for Doom for the Doomed 2015. I arrived just in time to catch the tail end of Mammothwing whose sound was as big and unforgiving as their name suggests. With impenetrably long bass lines taking us down the drone route, they were about as hostile a bunch as you could hope to meet. Delicious!

Two-man outfits are not as scarce as they once were and Khost showed that it is possible to deliver a dynamic and mountainous sound as a double act. This Brummie pair have been enjoying support slots to the likes of Moss and Conan which tells you everything about where their musical genes lie. With a deep sound that had the bar staff working overtime to ensure no glasses vibrated off the bar and onto the floor, Khost’s already intimidating barrage was further accentuated by the introduction of monastic-style chants.

With distress and destruction levels ramped up so high they threatened to penetrate the Asylum ceiling, the vocals were huskier than an Icelandic sledge puller. In fact, this would have been a standout audition for someone playing a person with a sore throat in a TV commercial for a herbal throat remedy. With the stage smothered in a soup-like smog, Khost were as defiant and uncompromising visually as they were aurally. On the flickering occasions when the mist parted it was thanks to a blood red light that merely amplified the tangible taste of impending death and doom.

As two-man projects of nihilistic torture go, From the Bogs of Aughiska take some beating, although Khost probably managed to deliver an even more sinister set than the balaclava wearing Irishmen. Compared to what had gone before, Khost’s closer was teetering on foot-tapping, both men bent double cradling their guitars as the percussion spun its merry web behind them.

Lords of Bastard were paying their first visit to Birmingham and their fuzzed up sound was something of an antidote to the previous two acts. The sight of a keyboard player at the Asylum is about as rare as a pair of flip flops in the Hockley hot house. With a pleasing vibrancy to their sound, Lords of Bastard, despite the name, were one of the easier acts to engage with; one song energetically racing away like a bolted horse with a stable hand in hot pursuit.

Once the Scots had left the stage it was the turn of Vails; another two-piece. This combo consisted of a guitarist plus drummer, rather than two guitarists, but as with Khost earlier, the finished product was a formidable one. The Swansea sledgehammer sound started in ferocious fashion and this merely increased in speed and aggression as they started to warm to the task. With riffs heavier than a shire horse, valley boys Vails created a great impression with a full on assault of our senses. Last song ‘Fuck Puncture’ was a killer.

Kroh were a little more lightweight than the majority gathered under the Doom for the Doomed banner. This was the second home town gig in a week for the band following their Scruffys date alongside Sworn to Oath and Kataleptic. Kroh’s singer Oliwia was having a great time but as female fronted bands dabbling with doom go Kroh perhaps lacked a little of the magic, mystery or menace to be found with the likes of Blood Ceremony, Windhand or Monarch.

Doom rites were reinstalled at the altar when Uncoffined arrived, having made the long journey south from Co Durham. A five-piece, the star of the show – and arguably of the whole day – was the band’s drummer and singer Kat. This is never an easy combination to master although Kat has certainly done that, maintaining an authoritative rhythm from the back of the stage whilst emitting some of the most caustic blackened vocals this side of the Norwegian fjords.

Such was the intensity of Uncoffined that the Asylum walls threatened to implode under the sustained attacks emanating from the stage with Kat’s blend of impressive guttural tones mixed with wanton wails as scary and intimidating as anything you’re likely to hear outside of a juvenile delinquents centre. The northern raiders did suffer a brief techy issue at the start of the set but this almost certainly went undetected by the majority of the audience and the band resolutely refused to let this knock them off their stride as they hammered out some songs from debut album Ritual Death And Funeral Rites.

Not for the first time Fear Me Music had staged a successful all-dayer at the Asylum with an atmosphere of warmth and friendliness that you’d struggle to find in many other places. The change around of bands was slick so boredom never had a glimmer of hope while hungry bellies from those who gathered from early afternoon were comforted by a gastronomic giant of a meal in the shape of a splendid veggie chilli. What more could you want? Well how about consummate professionals Moss to bring the whole day to a shuddering climax in their customary crushing style. The south coast doomlords are just about the perfect yardstick for rising doom acts to measure themselves against.

‘Spectral Visions’ was an audaciously heavy place to begin. Forget Red Ed’s tablet of stone, this Moss monster would turn that to dust such was its monolithic sound with singer Olly Pearson bellowing ‘Can you feel it taking over your mind’ through a swirling smokescreen as though possessed by raging demons.
‘The Bleeding Years’ and ‘The Choral Of Chaos’ from 2013 release Horrible Night are played at funereal pace, the later an homage to a sea monster almost as big and dark as Moss themselves.

Olly Pearson oozes charisma (yes, even in his tie dye shirt), Chris Chantler maintains his relentless pounding of the drums while guitarist Dom Finbow delivers deeper grooves than a combine harvester.
A 50 minute headline set was enough for five of Moss’s finest titanic tomes. These guys never rush and if you ever pop round for a cup of tea the teabag will probably be spouting fur by the time it’s offered to you.
The exaggerated extended rhythms are the essence of Moss who remain absolute masters of the genre, although to herald them as a shining beacon is something of an oxymoron for a trio more comfortable in the gloom and darkness.

Their last song ‘Tombs Of The Blind Drug’ opens with a screech from Olly sharp enough to open a tin of peaches before another epic journey towards the abyss begins. Doom… don’t you just love it! 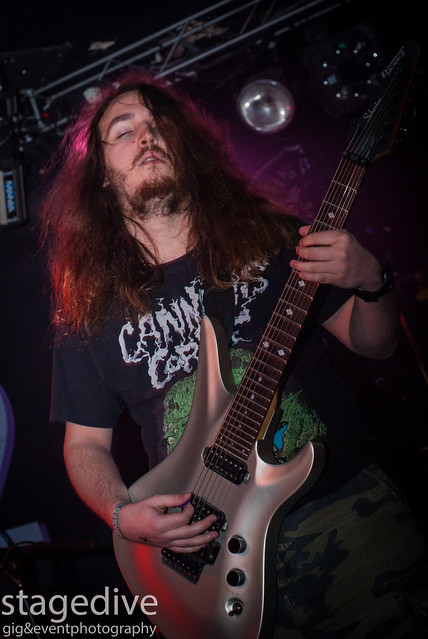